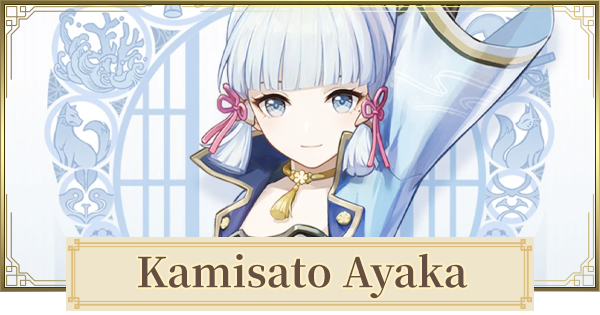 Ayaka is one of the best Cryo Main DPS character in-game. She can deal consistent Cryo DMG with all of her skills. This build focuses on increasing all of her skills from Normal attack to Elemental Burst.

This build for Ayaka focuses on increasing the Elemental Burst of Ayaka which is already very powerful on its own. This build, however, decreases the damage from Elemental Skill, Normal Attacks and Charged Attack. If you want to use Ayaka with another DPS (double DPS teams), it is recommended to use this build.

Ayaka is a powerful character that can easily deal Cryo DMG to enemies. She will also work well in Freeze comps and reaction teams.

Performs up to 5 rapid strikes.

Consumes a certain amount of Stamina to unleash a flurry of sword ki.

Summons up the frost with flawless poise, unleashing a Souken Gate that travels forwards continuously.

Frostflake Seki no To

Ayaka consumes Stamina and cloaks herself in frozen fog that moves with her. In Senho form, she moves at high speed on water. When she reappears, the following effects occur: Unleashes frigid energies to apply Cryo on nearby opponents. Cold congeals along Ayaka's blade, infusing her attacks a Cryo for a brief period.

When Ayaka crafts Weapon Ascension Materials, she has a 10% chance to receive double the product.

WHen the Cryo application at the end of Kamisato Art: Senho hits an opponent, Kamisato Ayaka gains the following effects:

With constellation 4, when using Ayaka's elemental burst the opponent's defense will decrease to 30%, and giving more Cryo damage towards the enemies. This makes Ayaka's already powerful Elemental Burst more devastating.

How To Use Ayaka ?

Most Of Her Damage Comes From Skill + Attack

Ayaka already has an high percentage for her normal attack but this is further powered when her elemental skill hits. Maximize the damage of Ayaka by minding the combo between these two.

Ayaka's Elemental Burst summons a powerful wave of Icy Wind that will greatly damage enemies on its path. The wind slows down once it lands on the opponents enabling multiple damage that will surely drain the HP of enemies and inflict Cryo multiple times.

One of the best feature of Ayaka is her ability to spread Cryo fast through her dash, normal attacks and skills. If paired with a Hydro character, she can easily perma freeze them.

Top Class DPS With Little To No Down Time

Ayaka can produce powerful damage using all of her skills from Normal Attack down to Elemental Burst. There are no wasted Talent when it comes to Ayaka.

Great For Crossing Waterbodies In The Overworld

Ayaka's special dash enables her to walk on top of waterbodies. After rising from the ground, her normal attacks can create "ice bridges" that does not consume stamina. She can cross any waterbodies easily.

Ayaka's Elemental Burst continuously deal Cryo DMG to enemies however it is rather difficult to hit nimble enemies with it. Gathering Enemies and freezing them will be the easiest way to do it making Ayaka pair well with Crowd Control characters such as Venti & Kazuha.

Ayaka Reviews From Other Users

Comment or send your opinions about Ayaka in the comments or feedback for a chance to be featured in the article!

What Do You Think Ayaka's Tier Is?

The Eldest Daughter Of The Kamisato Clan

With her family leading the Yashiro Commission, Ayaka is admired for her lady-like grace, beauty, and kindness. She's well-versed in different cultural arts and is seen as perfect by her peers.

Recruits The Traveler To Their Cause

It's Ayaka who approached the Traveler to help in going against the Vision Hunt Decree of the Shogunate. Although she's not part of the frontlines, it's her initiative that drives the rebellion forward.

How Tall Is Ayaka?

There is no in-game and official data regarding the height of Ayaka. We compared characters and Ayaka is Medium comparatively.

How To Get Ayaka?

Ayaka can be obtained from pulling her in limited-time Wish Banners that feature her.

Characters With Same Element and Weapon As Ayaka

Anon 45 thats incorrect i got after 77 pulls

Hi this is Anon 46 the passive of his weapon would work so much better than jade cutter for her, may I ask why the weapon isn't listed?

Is Ayato's sword good on her? I have her running double cryo with 4 piece blizzard strayer but if I gave her the weapon she'd crit every hit, then I could focus on crit dmg artifacts