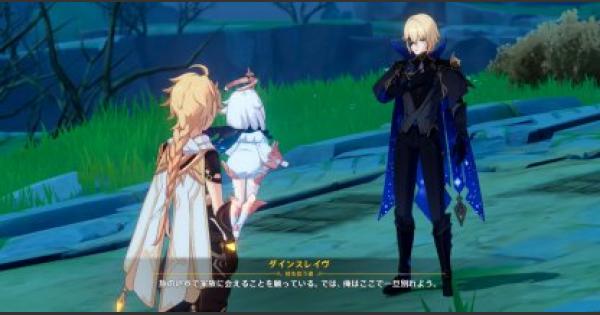 While Dainsleif already appeared in the story, it seems that him becoming playable is still far. He is expected to appear together with the release of the area, Khaenri'ah which is said to be the chapter that will unlock after exploring all 7 nations of Teyvat.

Official Video Of 7 Nations With Dainsleif

Introduced In The Main Story Quest

In the story quest, "Bough Keeper: Dainsleif" that was added in version 1.3, Dainsleif will be introduced to the main character.

Dainsleif Will Become Playable In The Future

Dainsleif will be playable in the future update. Likely with a big update where a new affiliation would be introduced.

Khaenri'ah, the nation where Kaeya is from, might be the place of origin of Dainsleif. This is shown by his overall design and eyepatch being similar to Kaeya.

tbh I feel like he won’t need a vision. After all he’s from Kheanri’ah. If you think about it Kheanri’ah was highly advanced in alchemy, so his power most likely comes from alchemy.

I think he’ll be an electro character. He will probably have blue lightning instead of purple like the rest

I think he will be "Cosmos" Element

I think he will be dendro (☘️) element

what if he actually dont have vision element. A character with physical skills only. if so, then aquila favonia is truly for him