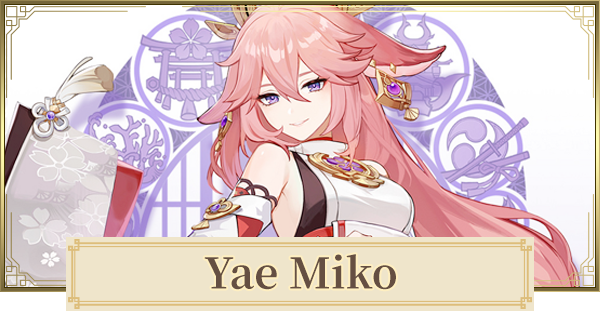 Yae Miko's burst is great for dealing huge damage to opponents. This build focuses on powering up her burst and enabling it to be casted faster after she setups with her skill.

Emblem Of Severed Fate Set Location & How To Get

Yae Miko's normal attacks are imbued with Electro which makes it easier to apply Electro status. Her charged attack deals AoE DMG and scatters which can proc multiple times making it a good source of damage.

Yae Miko can work as either a Main DPS or a Sub-DPS, though she does need another Electro character on her to be able to Burst continously. Currently, she's great for Taser comps and is a viable Superconduct Support character.

Summons forth kitsune spirits, initiating a maximum of 3 attacks that deal Electro DMG.

Consumes a certain amount of Stamina to deal AoE Electro DMG after a short casting time.

Plunges towards the group from mid-air. damaging all opponents in her path with thunderous might. Deals AoE Electro DMG upon impact with the ground.

Has the following properties:

When she uses this skill, Yae Miko will unseal nearby Sesshou sakura, destroying their outer forms and transforming them into Tenko Thunderbolts that descends from the skies, dealing AoE Electro Damage. Each Sesshou Sakura destroyed in this way will create one Tenko Thunderbolt.

Meditations Of A Yako

Has a 25% chance to get 1 regional Character Talent Material (base material excluded) when crafting. The rarity is that of the base material.

At 0 constellations, Yae Miko requires a battery to be able to use her Elemental Burst consistently. C1 eases the Energy burden that Yae Miko has.

Her elemental skill will ignore 60% of the opponents DEF, which greatly improves her damage potential.

How To Use Yae Miko ?

Yae Miko is able to provide constant and powerful Electro damage while not being on the field with her Elemental Skill. It also has a short cooldown and a 100% uptime.

Using Yae Miko's Elemental Burst while there are electro totems available would increase the number of lightning that will shoot down from the sky, enabling more DMG to be dealt to enemies.

▲There is a short time lag after the first shot.

Powerful Shot From The Sky

The Elemental Burst of Yae Miko works great as a finisher dealing powerful lightning damage to group of enemies.

Resets The Cooldown Of Elemental Skill

After using the Elemental Burst of Yae Miko, all the placed Elemental skill totems will disappear. In exchange, the cooldown for Elemental Skill will reset enabling a good flow.

Yae Miko is a great Electro enabler. As a Catalyst, all of her moves deal Electro damage and her Skill in particular is able to continously apply Electro even when Yae Miko is off the field.

Beginners can easily pick up Yae Miko since her rotation and the way her skills work are pretty straightforward. Building her is a bit more complicated, but it's not as bad since she doesn't have problems with scaling.

Yae Miko can work both as a Main DPS or a Sub-DPS. Her kit allows her to fairly good on both roles. As a main DPS, she can consistently dish out damage and as a Sub-DPS, she can easily support allies with her on-field skill.

Yae Miko has one of the highest energy requirements for a Burst at 90. In order to continously use her Burst, she'll need another Electro on her team to act as a battery.

What could be the Yae Miko's biggest problem as a main DPS is how long her animations are for her Normal Attacks. Slow Normal Attacks lower overall DPS because of this.

Yae Miko's team comps are heavily limited. Besides needing another Electro on the team, she only works well on Superconduct or Electro-charged team comps. Overload can work, but because Overload knocks back enemies, it's not ideal with her Totems.

At the overworld, it is noticeable that Yae Miko's attacks are easily blocked by wooden shields. It is better to switch characters when fighting with shielded enemies.

Yae Miko Reviews From Other Users

What Is Yae Miko's Tier For You

Grand Priestess Of The Narukami Shrine

Yae Miko is the current Grand Priestess of the Narukami Shrine. She resides over the the whole shrine and is considered one of high position in all of Inazuma.

Supports The Traveler To Change The Shogun's Mind

Besides being the Grand Priestess, Yae Miko is a close friend of El, the true Electro Archon, who has hid herself in her own realm. It's through her that the Traveler is able to further bring down the Shogun's walls and convince her that the eternity she seeks is not necessarily good for Inazuma.

Has Her Own Story Quest

Yae Miko also has her own Story Quest wherein you will get to know more about her personally as the owner of the Yae Publishing House.

How Tall Is Yae Miko?

There is no in-game and official data regarding the height of Yae Miko. We compared characters and Yae Miko is Tall comparatively.

How To Get Yae Miko?

Featured In Her Own Banner

You can get Yae Miko through her own featured wish banner, though since the banners are limited-time banners, you can only pull her when they are available.

Characters With Same Element and Weapon As Yae Miko

i love her personality, that's why i pulled her. i guess Raiden is the best team for her to use Yae as DPS. I use her as Sub DPS with Kokomi/Fischl/Kazuha and it's a mindblowing combo

Yae with Raiden is a constant storm that charges every burst in all the rotations. The biggest downside is that her E does not have an invencibility window, so she gets killed if a big enemy makes an AOE attack during her setup