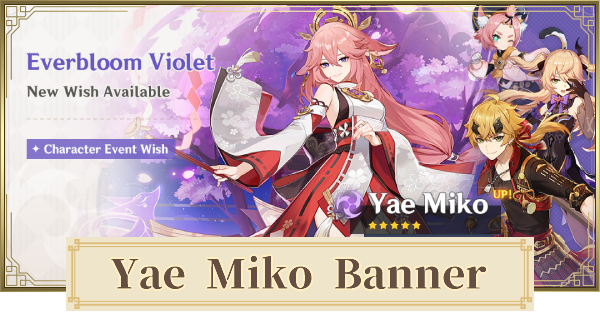 Yae Miko's banner is officially announced to be the first banner for version 2.6. This was announced officially in the 2.5 Livestream of Genshin Impact.

Yae Miko's banner will be released on February 16, 2022. This will be available after updating to version 2.5.

Who Is Yae Miko?

Yae Miko is the head priestess of the Grand Narukami Shrine. She is one of Raiden Shogun's friends and also the owner of the well-known Yae Publishing House.

Should You Roll For Yae Miko?

Pull If You Need An Electro Sub-DPS/Main DPS

Yae Miko's kit allows her to work well as either an Electro off-field support or an active on-field DPS. Unfortunately, the extent of the damage she can do is still unknown for now so it's still hard to say whether she's a strong character or not.

Yae Miko has a pretty well-balanced kit. Her skill allows her to provide Electro support even when she's off the field, and she can also hold her own as an on-field attacked. If you don't have an Electro support, she's definitely one to look into.

Thoma For A Shield Support

Thoma's a reliable shield support and the shields he gives are pretty strong with a good HP build. However, he does lack the ability to provide additional damage and his Burst's additional Pyro damage can disrupt Elemental Reaction combos.

Fischl has one of the best on-field Electro skills since it can easily work with other characters to enable for continuous Electro-related reactions. She does a good chunk of damage and can stay indefinitely on field by juggling her Burst and Skill.

Diona For All Rounder Support/Healer

Diona is one of those characters that bring a ton of benefits to her team. She's a shield and healer, and she can even enable Cryo reactions. Get her to C6 and you get a 200 Elemental Mastery buff to the whole team with every use of her Burst!