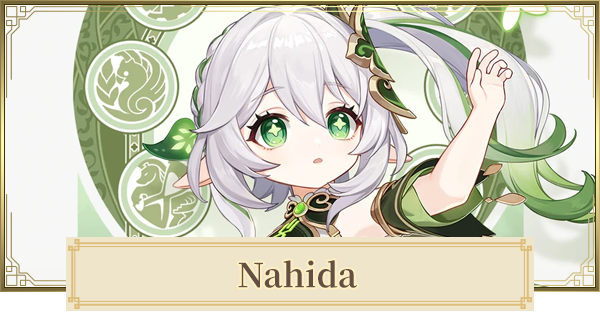 This build focuses on boosting the damage of Nahida's Off-Field Skill through reactions. With this build, Nahida is able to produce powerful reactions and can be used at any teams that needs Dendro.

This build focuses on increasing the personal damage of Nahida. This can also be a Sub-DPS build but it is preferred that you will use Nahida as an on-field DPS when using this build.

The weapon suggestions focuses on increasing personal damage of Nahida and the Elemental reaction damage.

Other Characters That Works With Nahida

Nahida Guide - How To Use Nahida?

▲ Marked enemies are connected and get damaged when you trigger a reaction.

The main source of damage and off-field Dendro of Nahida is from Elemental Skill. You can mark up to 8 opponents and trigger its effects every 2.5 seconds.

Scales From Both ATK & Elemental Mastery

Using Nahida's Elemental Skill on an item/material will automatically place that item in your inventory. This will allow you to gather materials from a distance. However, not all materials can be collected this way.

Reads The Mind Of NPCs That Were Connected To Akasia

You can also get additional dialogue when you use Elemental Skill to different NPCs in Sumeru.

Buffs The Effects Of Elemental Skill Of Nahida

The Elemental Burst of Nahida has a low burst cost and deals no damage. However, it increases the effectiveness of Elemental Skill. At higher ascension level, in also increases the Elemental Mastery of the on-field character that you are using.

Provides Buff To The Team

Elemental Burst increases EM of the active character inside it based on the character with the highest EM in the team. Because of this, it is recommended to aim for 1000 EM for Nahida for a consistent 250 EM buff for the whole team.

Should You Get Or Wish For Nahida?

Pull For An Off-Field Dendro Character

Nahida is the best off-field character that you can have for Dendro. She provides consistent Dendro inflictions with little to no downtime. She can also greatly increase the Elemental Mastery of characters in the team.

Constellation 2 allows Dendro Reaction to CRIT even if they are transformative reactions. This will increase the damage provided by reactions significantly and benefits not only Nahida but the whole team.

Nahida + raiden is so op.
I use Nahida, raiden, Xinqiu, bennet for spiral

well my team that works very well is:

This little girl cost me and arm and a leg to obtain.... Squeeze all available freemogems I can get, finally got her after 79 pulls, 2 hour before her banner gone. It was a clutch and she is worth the struggle