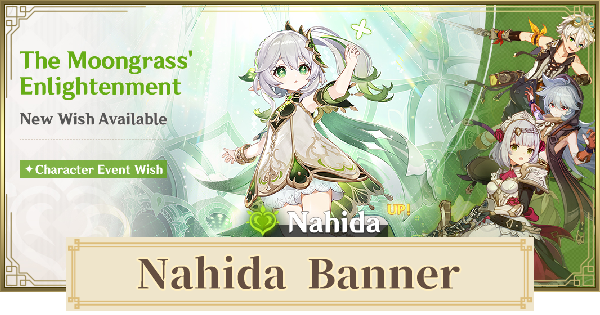 Nahida Banner is a banner for Genshin Impact 3.2. See release date of The Moongrass' Enlightenment Banner, 5 & 4 star featured characters, should you pull or get, rates!

Between Nahida & Yoimiya, Which Will You Pull?

Nahida is more known by the name of Lesser Lord Kusanali, Sumeru's current Dendro Archon. She's a relatively young god and all of her life was spent trapped in a cage.

Try your luck and see if you can pull Nahida from our Nahida Banner Gacha Simulator here!

Should You Roll For Nahida?

Depending on Nahida's damage numbers, she will either act as an On-Field Dendro or On-Field Enabler. Regardless, Nahida's Dendro application is strong thanks to her Normal Attacks and Elemental Skill. She's capable of continuous Bloom and other Dendro reactions.

Bennett For One Of The Best Supports

Bennett is still one of the best supports currently available in the game. Either get him or his constellations from this banner. The goal for Bennett is still C1 since it removes the HP condition for the ATK buff.

Noelle For A Geo Main DPS/Support

Noelle's a bit tricky to use since you will need to build a team around her. Though, this might be a good chance to get her C6, which greatly increases her DMG since it allows her to fully scale off DEF.

Pull For An Electro Main DPS

Razor For A Physical On-Field DPS

Razor is one of the few characters centered around Physical DMG. The higher his constellation is, the stronger he becomes as a Physical main DPS.

Nahida's capable of continuously applying Dendro, making her a strong Dendro enabler. Her Elemental Skill can hit multiple enemies at a time, through her Elemental Burst only benefits her.

Bennett is one of the strongest characters in the current Meta. He's highly flexible with his Burst not only healing, but buffing the damage of characters. He can easily fit in any team, except when he's at C6.

Noelle is a very flexible character that can play as a DPS, Shield support or a healer when given enough investment. At C6, she becomes a better DPS since she now fully scales of DEF.

Razor is a 4-star melee character that has a powerful physical damage. His Burst makes it easier for him to proc Superconduct, bolstering his Physical DMG output even more!