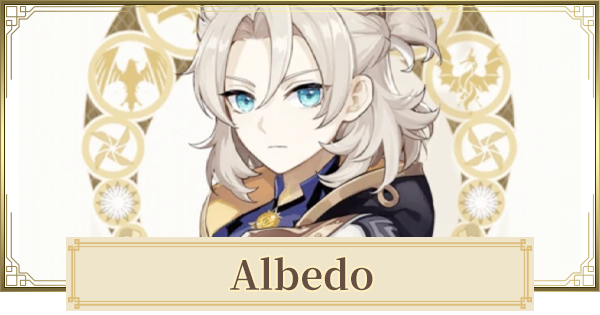 Because of the lack of a 5-star DEF-scaling sword or a weapon with sub-stats that benefit Albedo, the best weapon he can have right now is the Cinnabar Spindle. Unfortunately, it's an event-only weapon and if you didn't get it, there's no current way to get it right now.

Husk Of Opulent Dreams Is The Best Artifact

Other Characters That Works With Albedo

Notes About Team Comps For Albedo

Albedo can work as a sub-dps for just about any team. The only problem is that he can steal Elemental reactions instead. But overall, Albedo is an easy character to slot into most team comps.

Albedo Guide - How To Use Albedo?

Places An AoE That Will Deal Geo DMG Every 3 Seconds

Using Albedo's Skill will summon a Geo Construct with an AoE around it. When you damage an enemy while inside the field, it would cause a Geo Explosion, dealing Geo DMG to enemies in a small AOE.

Gathers Energy For The Team

Every explosion from this Elemental Skill will release Geo Energy making Albedo a great battery for Geo characters.

One of Albedo's best Ascension Passive is "Homuncular Nature", which increases the Elemental Mastery of the team by 125 after his Elemental Burst. This will increase the effect of all Elemental Reactions.

Creates Additional Geo Explosions When Casted Inside The Skill Area

If you use Albedo's Elemental Burst inside the area of the skill, Defense-scaling flower explosions will appear in the field, dealing additional damage.

Should You Get Or Wish For Albedo?

Pull For An On-Field Geo Support

Albedo is a strong Geo Sub-DPS since his skill can continuously deal Geo damage and has such a low cooldown, it's on an almost 100% uptime. He can fit in most team comps beyond just Geo team comps!

At Constellation 2, Albedo's Elemental Burst will be buffed depending on the Defense of Albedo. This makes Albedo's Burst easier to build for you and you can simply build DEF for him.

With or without CS? Since his BiS weapon, probably responsible for the dmg, is no longer available, such statements are meaningless for new players. I only read praising words from players who own this weapon. But hey i can use HoD, it's not quite as great as CS, but who needs meta without endgame

Strongest character in the game tbh
Drop a flower that adds 25k dmg to your attacks every 2 seconds or so, skill has basically no cd and lasts for ever

Some peoples say he is not good but he Fucking is!!!!!!

Actually some Info can be seen in small pic:
Rarity 5 Star
Element Geo
Weapon 1h Sword
How To Get
Banner Wish in December 2020