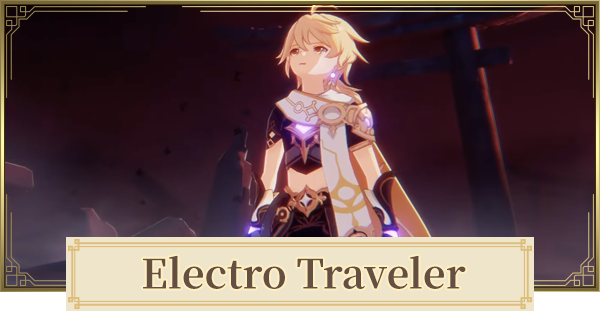 The Electro Traveler can work either as a main damage dealer or support. Electro traveler's attack will generate Abundance Amulets which can restore elemental energy that can help increase the elemental recharge by picking them up.

Performs up to 5 rapid strikes.

Plunges from mid-air to strike the ground below, damaging opponents along the path and dealing AoE DMG upon impact.

You call upon the protection of lightning, knocking nearby opponents back and dealing Electro DMG to them.

How To Use Electro Traveler ?

Upon casting the Elemental Skill, collect the three (3) Abundance Amulets in the field in order to replenish your selected character on field and at the same time adding damage buff to your attacks.

Activating the Elemental Burst will knock off the approaching or nearby enemies, while it also increases the team's ATK damage that continuously aiding a good amount of Electro DMG.

A Very Good Battery For Team

Electro Traveler is an excellent battery and support for the team, as the traveler is suitable in any team comp in the game.

The Electro Traveler's Skill and Burst will provide energy recharge during his burst and increases the team's ATK damage.

Electro Traveler's Elemental Burst costs a lot of energy making it require a high amount of Energy Recharge for it to remain constant.

Electro Traveler Reviews From Other Users

What Is Electro Traveler's Tier For You

The Main Protagonist Of The Game

The Traveler is the main playable character in Genshin Impact. Choose between the twins: Lumine & Aether and start your journey to explore the world of Teyvat together with Paimon!

Resonate To Other Element

The traveler/player can resonate itself to any Statue of the Seven. Same goes to the other nation if you want to acquire or resonate with their element.

How Tall Is Electro Traveler?

How To Get Electro Traveler?

Characters With Same Element and Weapon As Electro Traveler

TIP: if your putting shimenawas reminicense on yoimiya (If your planning to get her), use c4 electro traveler, she/he will give yoimiya energy since she is a ult dmg dealer (yoimiya)

@orpheus the exile is only for starters so if people want 5 star artifacts on her they can use 2 pc emblem of servered fate.

the person who wrote this clearly never used them lol. 4pc tf, why would you even think of using that?

lmao they straight up copy pasted Fischl build without even changing the team name. and it's not even a good build to begin with. what a joke of a site