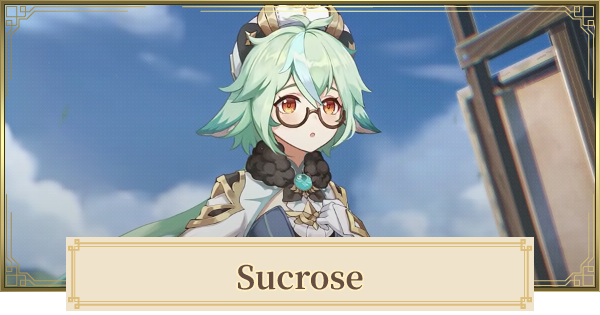 Sucrose is a flexible character that can gather enemies debuff enemies, and buff your characters. This build maximize Sucrose's support ability making her a top class support for a lot of teams.

This build relies on Sucrose being on-field for most of the fight. You'll want to increase her Crit Value if you want to make her a DPS.

Sucrose increases the Elemental Reaction DMG by boosting the whole team's Elemental Mastery that scales with her own. This makes Sucrose a flexible member of any team providing Crowd Control and DMG Buff. This team maximizes Sucrose's potential.

Consumes a certain amount of Stamina and deals AoE Anemo DMG after a short casting time.

Calling upon the power of her Wind Spirits Sucrose plunges towards the ground from mid-air, damaging all enemies in her path. Deals AoE Anemo DMG upon impact.

Creates a small Wind Spirit that deals Anemo DMG to enemies in an AoE, pulling them towards the location of the Wind Spirit before launching them.

If the Wind Spirit comes into contact with Hydro/Pyro/Cryo/Electro elements. it will deal additional elemental DMG of that type. Elemental Absorption may only occur once per use.

When Sucrose triggers a Swirl effect, characters in the party with the matching element have their Elemental Mastery increased by 50% for 8s.

When Sucrose crafts Character and Weapon Enhancement Materials, she has a 10% to obtain double the product.

With Constellation 1, you will get one more charge of Sucrose's Elemental Skill. This will decrease the amount of energy that Sucrose needs and works well with Sacrificial Fragments.

Constellation 4 Enables Sucrose To Be A Main Carry

With C4 of Sucrose, the Elemental Skill's cooldown will be further decreased with Sucrose's normal attack. This will enable Sucrose to be a main carry especially with a team of off field elements to swirl.

How To Use Sucrose ?

Due to the EM increase that Sucrose's Skill provides, it's important to use her skill first to further increase the elemental reaction damage of the team. Make sure to swirl the right element since the EM buff is only applied to the same element she swirls.

Besides the EM increase, you can also use Sucrose's Skill to interrupt enemies. If they're small enough, they'll even be knocked down for a second, giving you enough time to either attack or get some heals in.

The whole team will receive a big increase to their Elemental Mastery with the use of Sucrose's Elemental Burst. This a team-wide buff, making this a great set up for elemental reaction combos!

Gathers Enemies In A Single Place

Enemies caught in Sucrose's Elemental Burst will be continuously knocked down and pulled to a single point. This is great when setting up for combos or when you have a one-shot attack so it doesn't miss.

Sucrose has been elevated from just an Anemo support to a pretty good Anemo Sub-DPS thanks to the increase in Swirl damage patched in. She provides great utility with her EM buffs and can do good damage through Swirl.

Because of the EM buffs she provides, Sucrose is one of the best characters to have when running an Elemental Reaction team. She'll work in all types, except for Freeze comps since it doesn't benefit from EM.

Niche As A Main DPS

Although it's possible to make Sucrose a main DPS, her kit does not really fit it. It can be done, at the expense of lowering the EM buff she gives and the overall Swirl damage she can provide.

One of the drawbacks of Catalyst users is the auto-aim they have and this happens to Sucrose too. Her Elemental Burst can be thrown at other targets sometimes, breaking your combo.

Sucrose Reviews From Other Users

Comment or send your opinions about Sucrose in the comments or feedback for a chance to be featured in the article!

What Do You Think Sucrose's Tier Is?

A Researcher Of Alchemy

Sucrose is Albedo's assistant that also resides in Mondstadt. As her area of focus is Bio-Alchemy, she is highly interested and focused on experimenting and researching more about alchemy related studies.

Very much known to be a shy girl, Sucrose is always anxious and worried whenever she talks or approaches people as she always tends to think that she might be a bother to them.

How Tall Is Sucrose?

There is no in-game and official data regarding the height of Sucrose. We compared characters and Sucrose is Medium comparatively.

How To Get Sucrose?

Get Sucrose Through Wish Banners

Sucrose doesn't have her own character wish banner, however you can still obtain Sucrose through these permanent banners: Wanderlust Invocation! and Beginner's Wish.

Obtain Sucrose Through Other Character Banners!

You can also get a chance to pull Sucrose through other characters' banners. Drop rates for Sucrose will be boosted depending on the banner.

The rate of Sucrose is boosted at the following wish banners.

Characters With Same Element and Weapon As Sucrose

All Characters With Anemo Element

the constellation mentions oz for some reason?

should i equip an em goblet or an anemo dmg bonus% on sucrose?