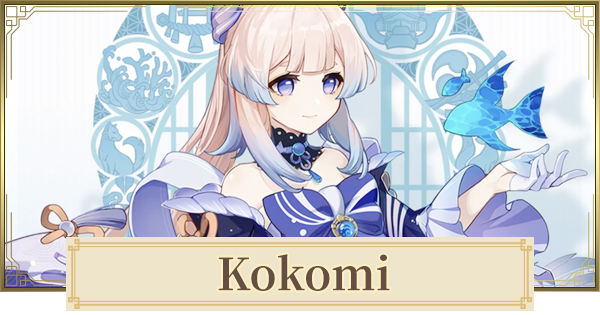 Kokomi is a playable Hydro Character in Genshin Impact that uses a Catalyst. Kokomi is also the Shrine Priestess of Watatsumi Island and the main leader of the Resistance against the Shogunate of Inazuma.

Kokomi can deal decent damage while in her burst form for all of her skills during the duration scales with her max HP.

This build focuses on using Kokomi's Skills to spread Hydro and provide buff through the Tenacity of Millelith artifact and effects of weapon.

A Hydro Catalyst with an off field Hydro Skill, Kokomi is one of the best characters for any spreading the Hydro status to enemies. She is perfect as a support and healer at Freeze comps.

Normal Attack: The Shape of Water

Performs up to 3 consecutive attacks that take form of a swimming fish dealing Hydro DMG.

Consumes a certain amount of Stamina to deal AoE Hydro DMG after a short casting time.

Gathering the might of Hydro, Kokomi plunges towards the ground from mid-air, damaging all opponents in her path. Deals AoE Hydro DMG upon impact with the ground.

Summons a "bake-kurage" ceated from water that can heal her allies. Using this skill will apply the Wet status to Sangonomiya Kokomi.

Deals Hydro DMG to surrounding opponents and heal nearby active characters at fixed intervals. This healing is based on Kokomi's Max HP.

The might of Watatsumi descends, dealing Hydro DMG to surrounding opponents, before robing Kokomi in a Ceremonial Garmade made from the flowing waters of Sangonomiya.

These effects will be cleared once Sangonomiya Kokomi leaves the field.

If Sangonomiya Kokomi's own Bake-Kurage are on the field when she uses Nereid's Ascension, the Bake-Kurage's duration will be refreshed.

While donning the Celestial Garment created by Nereid's Ascension, the Normal and Charged Attack DMG bonus Sangonomiya Kokomi gains based on her Max HP will receive a further increase based on 15% of her Healing Bonus.

Decreases swimming Stamina consumption for your own party members by 20%. Not stackable with Passive Talents that provide the exact same effects.

Sangonomiya Kokomi has a 25% Healing Bonus, but a 100% decrease in CRIT Rate.

Constellation 4 For A More Stable Rotation

The Elemental Burst of Kokomi is essential for keeping the Bake-Kurage's uptime. However, she suffers from Energy problems since there aren't many Hydro characters that can provide energy. However, the 4th constellation will not only give her more energy but also additional speed enabling her to deal more damage during her burst.

How To Use Kokomi ?

Kokomi summons a jellyfish that last for 12 seconds which heals and damages enemies around it while dealing Hydro to enemies hit. The jellyfish does not disappear even if you switch character which makes it an amazing skill for triggering Hydro Elemental reactions.

Resets The Duration Of Elemental Skill

Increases The DMG Capability Of Kokomi

The second role is to increase Kokomi's personal damage. Elemental Burst will increase the damage of Kokomi's skills that scales from her Max HP. The effects of this, however, disappears after switching characters.

An All-Rounder That Can Do Multiple Roles

Kokomi is one of the few characters that can fulfill all three roles effectively. She can be a great damage dealer through reactions and her burst, she effectively supports the team with her consistent hydro application and finally, she has powerful heals that can easily keep the whole team's HP full.

Easier To Build Compared To Other Characters

▲ Automatically decreases 100% to your Crit Rate

Kokomi, due to her passive, has negative 100% crit rate. While this reduces her damage capabilities, it however also make her easier to build because you do not need to balance between two CRIT statuses and other damage skills. During her Burst, all of her skills will scale for HP making her making her a fairly simple character to build compared to other characters.

Kokomi needs 70 Energy to activate her Elemental Burst. While having a huge amount needed for Elemental Burst, her Elemental skill does not provide enough energy for it to be self sustaining. She will be needing another character to serve as a battery for consistency.

Her Inability To Crit Makes Her Damage Below Average

Because of Kokomi's inability to deal critical attacks, compared to other DPS characters, Kokomi falls short when it comes to raw damage. However, her damage can be increased by using off-field supports such as Raiden Shogun that will enable Kokomi to produce more damage through reactions like Electro-charge.

The Jellyfish Stays On One Place

▲ Cannot be repositioned until it dissapears.

Kokomi's support is limited by the location where the Jellyfish is placed. Unfortunately, unlike the Oz by Fischl, it cannot be repositioned unless you summon it again so there will be times that it will be positioned in places that will not help the team.

Kokomi Reviews From Other Users

What Is Kokomi's Tier For You

The Divine Priestess of Watatsumi Island

Although young, Sagonomiya Kokomi is the Divine Priestess of the Watatsumi Island and is considered its governing head. She's diligent in her duties, but does find difficulty in being in the spotlight.

A Master Strategist & Leader Of The Rebellion

Kokomi is a master strategist, leading the rebellion to victories they couldn't have managed otherwise. She does not value war, but she knows it is a necessity for her people to be free from the Vision Hunt Decree.

Kokomi appeared in the Archon Quest Chapter two as the leader of the Resistance who was able to turn the tides of the war upon her arrival.

Has Her Own Story Quest

Kokomi also has her own Story Quest wherein you will get to know more about her personally and her role on Watatsumi Island.

How Tall Is Kokomi?

There is no in-game and official data regarding the height of Kokomi. We compared characters and Kokomi is Medium comparatively.

How To Get Kokomi?

Get From Kokomi Banner

The rate drop for Kokomi Sangonomiya is boosted at the following wish banners.

Characters With Same Element and Weapon As Kokomi

All Characters With Hydro Element

insanely good healer and DPS. Not mentioned here as advantage is her range which is enormous.

she's so underrated.. everybody loves seeing huge dmg numbers on screen, but Kokomi with 4 pieces of Ocean Clam is ridiculously good and very fun to play (i use her with Ayaka/Yae)

I like her heal better cause she won't cause the other character in wet status not like Barbara, while deal aoe hydro damage and spread wet status around. Her burst skill actually quite good, specially when you have revived chars that need heal.