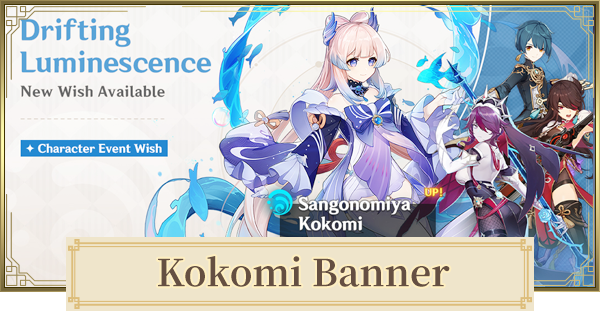 Kokomi Sangonomiya's banner is officially announced during the 2.1 Livestream as the second banner for 2.1 Update, and it will start after Raiden Shogun's Banner.

Should You Pull In Kokomi Banner?

A Good Support & Healer For Team

Kokomi can provide good support or battery for the team. Her normal, charged attacks hitting the opponents will restore HP to the party members which is based on the amount of her Max HP.

Pull For The Featured Characters Too!

The 4-star characters are also good in off-field support too. The 4-star featured characters has a good synergy that will be a good use towards your team.

Try You Luck and try to get all of the pick up characters of Kokomi's Banner with this Gacha Simulator!

Best Characters In The Kokomi Banner

Kokomi will be an off-field healer that will constantly inflict Hydro to enemies in which will make it easier to conduct an element reaction coming from the team.

Xingqiu is one of the best Hydro Support in the game, whereas he can reduce hydro resistance while in combat. His skills are both good as offense and defense.

Beidou As The Main Damage Dealer

Rosaria As A Cryo Support

Rosaria's skill will increase the team's Crit Rate while on the field dealing a good damage towards the enemies. She will be an excellent Cryo Support for the team.

why did i end up getting diluc when trying to pull for kokomi? weird

will ganyu be the 2.2 rerun? or will it be another Inazuma character like Garou? Idk

I want to get Xingqiu should i do 10 pulls or single pulls to get him?

I am around 60 pity and i want xingqiu really bad, but i am also saving for ganyu rerun. Should i risk it and pull for him?