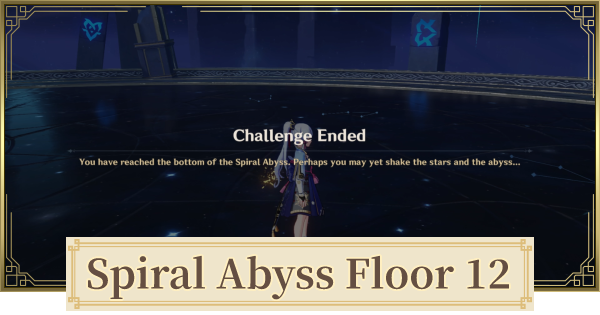 Check this Spiral Abyss Floor 12 Guide for Genshin Impact 3.1. This includes how to unlock Floor 12, tips, enemies, rewards, recommended party and how to get 9 stars.

Dendro Has An Advantage Here

The Blessing of the Abyssal Moon favor Dendro reactions, making Dendro a strong pick for this floor. Bloom, Hyperbloom, or Burgeon should be your main reaction if you're going for a Dendro Reaction team.

Floor 12 is basically a Damage Check. Make sure to bring well-built characters that can work well together to dish out as much damage as they can! Clearing it is a challenge by itself, but this is even more intensified when aiming for 9 stars.

A classic team, this setup will allow you to deal a ton of damage without so much risk of being damaged yourself. The goal is to keep enemies frozen while Ganyu continues to deal Charged Attack for high damage.

The Raiden Shogun National Team will be able to proc multiple Elemental Reactions at once for high damage. Each character is also capable of dealing big damage with their Bursts, which will be further enhanced by Bennett.

Enemies Can Be Grouped Up With Anemo

The enemies in this section are light enough that they can be grouped with crowd control abilities, including Venti's Burst and Sucrose's Burst. You can use this to your advantage to quickly group them up and hit them with attacks.

Defeat The Kairagis At The Same Time

Aim to take out both the Kairagis at the same time. If you only defeat one and the other is left, they will regenerate health, making the fight significantly longer. It's best to spread your damage between the two of them.

Use Elemetal Damage Against Ruin Machines

The Maguu Kenki always starts with a brief windup animation wherein it is invulnerable to damage. You can attack it with your Elemental Skill to get energy, but attacking it for damage is a waste of time.

Use The Edge Of The Arena To Group Enemies

Make it easier for you to hit multiple enemies by grouping them at the edge of the Arena. This way, you contain them in a small area as the edge acts like a wall!

Must be fun having 2 Monas

For those who have them, Raiden-Xiangling-Kazuha-Bennett destroy the 1st chambers.
I ran that and clear the first halves of chambers 1 and 3 in around 40-50 seconds. Cryo Hypostasis is longer but I can kill it without regen.
2nd Half team is a lot tougher to build for me though haha

idk if they read this or not, i would just say that u did it well, I'm glad to have this guide-and maybe it isn't enough to describe other playstyles but this quite cool enough. Keep supporting, cheer

Lol the rewards are wrong for this floor :clown: