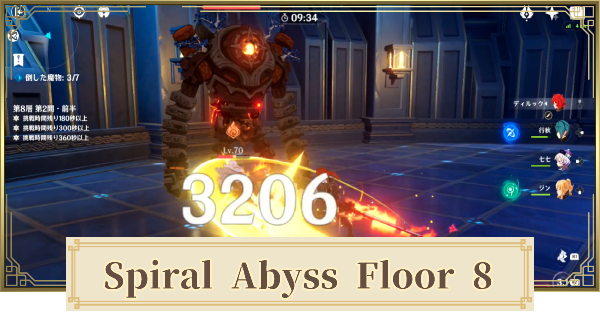 Check this Spiral Abyss Floor 8 Guide for Genshin Impact. This includes how to unlock Floor 8, tips, enemies, rewards, recommended party and characters and how to get 9 stars.

Ideal To Have Low HP

Because of the Ley line disorder, having lower health is ideal in this dungeon to get various benefits. If you're uncomfortable with below 30% health, still to 60% to get ATK and DEF buffs.

Have Pyro & Hydro On Teams

The 8th Floor is much simpler than the 7th floor. Make sure to bring a Pyro Character during the first half and a Hydro Character in the second half. This are direct counters to the enemies that you will find in the chamber.

The Hydro Abyss becomes a big problem as it can apply Hydro to you, leaving you at risk of being frozen by Cryo Abyss Mage. An Electro attack should Electro-Charge it, dealing high damage.

Tons Of Hilichurls In Both Halves

Prioritize taking out the Hilichurls before focusing on the Ruin Guard. Although the Ruin Guard is the bigger threat, Hilichurls will get in the way during the battle and can even do a ton of damage if left alone.

Use Elemental Weakness To Stun Regisvines

Having Pyro is extremely important during the first half of each chamber as they can directly counter the Cryo enemies. Bennette can further buff Diluc's ATK to deal huge fire damage.

Childe and Barbara could easily take care of any Pyro enemies. With Sucrose, you can amplify the spread of Hydro then use Fischl to Electro-Charge enemies.

yes lol they do LMAO