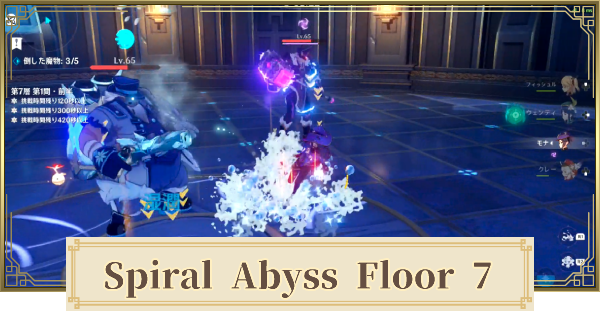 Check this Spiral Abyss floor 7 Guide for Genshin Impact. This includes how to unlock floor 7, tips, enemies, rewards, recommended party and characters and how to get 9 stars.

Use Counter Elements To Deal With Barriers

Fatui Skirmishers often adapt barriers that will prevent you from dealing damage directly at them. The only way to remove the barriers is by using the element it's weak to.

Okay To Use Low Level Characters

Check Out How To Level Up Characters

Focus On The Hydrogunner First

During the first half of the Chamber, you will need to focus on the Hydrogunner enemy as they can heal their allies. Leaving them alone will prolong the fight unnecessarily.

Be Careful Of The Geochanter

The Geochanter will act as the main support of the enemies in this chamber. They will continue to increase the enemy team's defense power if left alone.

Besides healing enemies, the Hydrogunner will add Hydro to you, making you at risk from the Electrohammer enemy's elemental attacks.

It's recommended to have an electro character to deal against the water enemies during the first half of chambers. Applying Electro and Cryo is also effective against the enemies due to the defense debuff it applies.

For the second half, have a Pyro character is a must to deal against Cryo and Geo characters in Chamber. Barbara will also be able to deal with the shields of the Pyro enemies there.

i tried doing these teams it doesnt work you know what would work you guys coming over to our houses and doing the work for us :P

yeah this is way too hard for me to complete