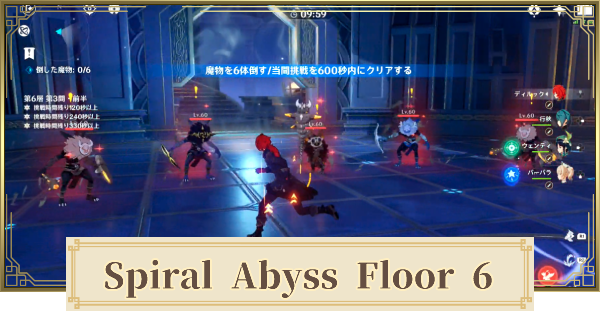 Check this Spiral Abyss Floor 6 Guide for Genshin Impact. This includes how to unlock Floor 6, tips, enemies, rewards, recommended party, f2p characters, and how to get 9 stars.

Don't Allow Enemies To Mob You

Multiple enemies will spawn at a time inside the floor and you can easily get overwhelmed. Move around the arena and thin them out, instead of fighting them all at the same time.

Getting hit by the Whooperflower's Gattling attack not only does a lot of damage, but it also stun locks you for a bit. Make sure to move horizontally to escape from the attack.

Heavy Shielded Enemies During First Half

You'll need a lot of firepower for the first half of the chamber with 3 shielded enemies coming in. For the Wooden shield, you can use Pyro to break it, while the Geo shield can be broken easily by a claymore. Use Pyro to break the Cryo Abyss Mage's shield.

The biggest threat in the whole floor is the Ironhide Sawachurl. It's high in defense and attack, requiring you to dodge and time attacks to specific openings. Be especially careful of its multiple overhead attacks.

With Diluc and Childe as your main damage dealers, you will be focusing on amplifying their damage through your teams. It's ideal to focus on Pyro in the first team and Hydro on the second.