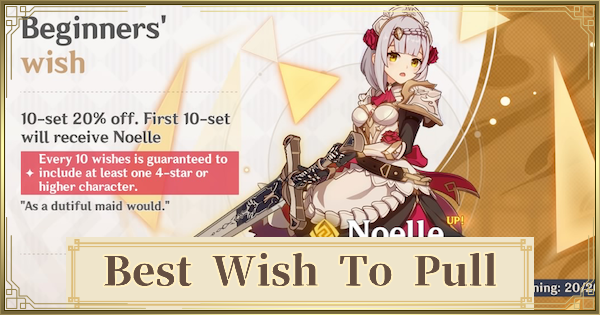 Because Genshin employs a Gacha system where the characters you get are random, it's inevitable that recommendations will differ depending on a given player's current character lineup and preference. In this section, we've presented several cases and provided recommendations for each one.

Great If You Need A Sub DPS

Albedo is currently one of the best Geo Sub-DPS in the game since both his Elemental Skill and Burst are on-field abilities. His damage potential is also fit for any Geo team with a missing Sub-DPS role.

Great If You Need A Physical Carry

Eula is perhaps the best physical carry yet in the game. She is a character that does not need multiple elements to deal powerful damage and is very free to play friendly.

Has 2 Of The Best Supports In The Game

If you need a support character, then this banner is a must-pull. Bennett and Rosaria are amazing supports that will definitely help boost the damage of your team through ATK Buff or Crit Rate buff.

Both Bennett and Noelle are support healers. Bennett can fit in any team comp while Noelle usually thrives in Geo comps. Noelle can provide healing and shields while Bennett gives healing and buffs.

The Song Of Broken Pines is not exclusively great on Eula only. It can be also good on some other DPS Physical Claymore characters, including Razor and Xinyan.

Song Of Broken Pines How to Get & Is It Good?

Freedom-Sworn Is Good For EM Supports

If you have Kazuha, pulling for this weapon is worth it since it's his BIS. If you don't have him, it's a good sword for other EM build supports.

Freedom-Sworn How to Get & Is It Good?

This weapon banner includes some of the most sought after weapons, including the Dragon's Bane and Wine And Song. It also includes Alley Hunter, Lion's Roar and Sacrificial Greatsword.

What Is Character Event Wish-2?

Character Event Wish-2 is a new type of new Wish type specifically made for rerun banners. This will often run simulatenously with another banner, allowing for 2 Character Banners at the same time.

How Does It Work?

The Character Event Wish-2 is just like any other Wish event. What makes it different is that it shares Guarantee and Pity with it's concurrent Character Event Wish banner. You can build either pity on any of the two banners and the guarantee will carry over.

Should I Pull On The Character Event Wish-2?

The depends entirely on which character is featured, what you need in your team, and personal preference. If you're building pity, you can do it on either Wish Banners since they share it anyways.

Pull If You Want A ★5 Weapon

Epitome Invocation banner guarantees a ★5 weapon with 80 attempts so pull this banner if you want a better weapon. However, the priority of weapons is lower than characters in the early game, so pull other banners if you don't have strong characters yet.

Must Pull For Beginners

The Beginner's Wish is so far the best banner to roll since you can get ★ Noelle on your first 10-wish roll and a ★4 or above character on your second 10-wish roll. If you have just started playing this game, pulling this banner is practically a must.

Wanderlust Invocation banner is a permanent banner and the drop rates of higher rarity items are lower than other banners. We recommend you to save your gems instead of pulling this banner.

The required amount of gems differs according to each banner. One Acquaint Fate or Intertwined Fate can be exchanged for 160 Primogems. One Primogem can be acquired with the exchange of 1 Genesis Crystal.

Gacha System - How To Unlock & Roll

Raise Adventurer Rank to 5 To Unlock

Genshin's gacha feature, Wishes, unlocks once your Adventurer Rank reaches 5 level. If you want to unlock gacha, play the main story for about 20 minutes.

How To Pull Gacha

Tap the wishing icon displayed on right upper corner of your screen and move to the gacha page.

Step 2: Choose Which Banner To Pull

Select the banner you want and start pulling gacha. If you don't have enough Primogem, your Genesis Crystal will be converted.

Banners will only be available for a set amount of time before they are rotated out for a new one. When will the older banner be swapped back is anyone's guess, if at all, so grab the banners you like if you got the supplies.

The Beginner's Wish is guaranteed to include ★4 Noelle on the 1st 10-wish roll and ★4 or higher character on the 2nd 10-wish roll. The chance of getting a super rare character is much higher than other banners so you should definitively choose this banner first.

Pull Weapon Gacha If You Have Enough Characters

If you already own enough strong characters, going for the weapon gacha like Epitome Invocation is also recommended. A ★5 weapon is guaranteed at least once per 80 attempts. Since the stats of ★5 weapons are much higher than ★4, going for this banner is a good bet if you want to focus on increasing your damage.

I have currently got a team of ningguang, rosaria, xiangling and fischl

You now would need to wish 20x to get a character instead of 10x with the current change they made with the rotation of 4 star. I hope they don't do this with 5stars cause that's more of a BS. Currently got 5 star weapon on permanent wish so still looking into it.

Hold up - If you pull a ★5 character that is not Klee, next ★5 character you pull will be Klee(tartaglia banner detail)
So i got childe and if i roll again i will get klee?