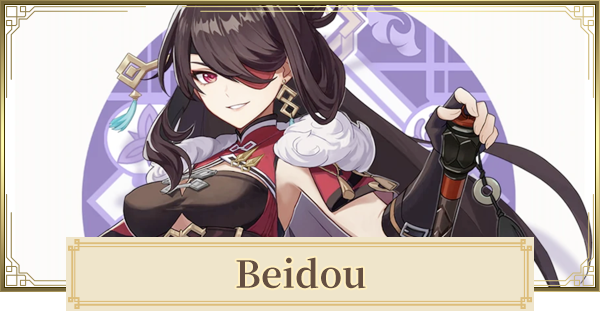 For Substitute Artifacts, Use The One With Best Sub Stats

The artifacts listed as substitute produces around the same damage and only out-damages each other by a small percent. It is better to use the Artifact that has a better CRIT Rate and Sub Stats.

If you want to specifically use Beidou as your only electro character, you can change your ATK% Sands to ER to compensate for her energy issues. Do note that you'll lose damage output if you do.

This build focuses on making Beidou an on-field dps carry. With this build, you can opt to have lower ER since Beidou will be on the field to collect particles with her skill. She can also fit into various team comps with this build.

Use Thundering Fury For Reaction Teams

With this set, you'll want to build a reaction focused team that can activate the passive of the 4-pc set bonus. Activating it can be difficult, but being able to reduce her burst cooldown allows her to deal more damage with Stormbreaker.

Beidou is one of the best Electro spreader in-game. She also works well as a DPS with her powerful counters. However, she is hindered by her burst having high energy cost. This team helps Beidou gain energy faster and increase the power of her Burst with Electro reactions.

Perform up to 5 consecutive strikes.

Drains Stamina over time to perform continuous slashes. At end of the sequence, perform a more powerful slash.

Plunges from mid-air to strike the ground, damaging enemies along the path and dealing AoE DMG upon impact.

Lifts her weapon up as a shield. Max DMG absorbed scales off Beidou's Max HP.
Attacks using the energy stored within the greatsword upon release or once this ability's duration expires, dealing Electro DMG. DMG dealt scales with the number of times Beidou is attacked in the skill's duration. The greatest DMG Bonus will be attained once this effect is triggered twice. The shield possesses the following properties:

・Has 250% Electro DMG Absorption Efficiency.
・Applies the Electro element to Beidou upon activation.

Recalling her slaying of the great beast Haishan, Beidou calls upon that monstrous strength and the lightning to create a Thunderbeast's Target around herself, dealing Electro DMG to nearby enemies.

・When Normal and Charged Attacks hit, they create a lightning discharge that can jump between enemies, dealing Electro DMG.
・Increases the character's resistance to interruption, and decreases DMG taken.

Counterattack with Tidecaller at the precise moment when the character is hit grants the maximum DMG Bonus.

Gain the following effects for 10s after unleashing Tidecaller with its maximum DMG Bonus:

With Constellation 2, the Elemental Burst of Beidou will affect multiple enemies doubling the damage that she can deal every second. Constellation 2 is recommended for Sub-DPS Beidou.

How To Use Beidou ?

During your guard phase, Beidou will have Electro will be inflicted on her. This can be used for cleansing elements inflicted to Beidou and use for various Electro gimmicks in Inazuma.

Beidou's Burst makes every hit you do inflict an additional Electro damage to the target. This makes it easier triggering Electro Reactions while dealing strong damage. It stays even after switching making it a great combo for swift attacking characters like Childe and Yoimiya.

Beidou's Elemental Burst will provide a very powerful damage to enemies while enabling Electro reactions. This is extremely useful at Electro-Charge comps.

Beidou's Elemental Skill, especially during max counters, can deal powerful damage to enemies. It also has a wide range making it great for battling multiple opponents.

Requires A Team Battery To Be Consistent

Beidou suffers from lack of energy source in her kit. This combined with her high Burst Cost makes it difficult for her Elemental Burst to be up all the time. Having a character that will provide energy like Fischl is essential for Beidou to be consistent.

Beidou Reviews From Other Users

Comment or send your opinions about Beidou in the comments or feedback for a chance to be featured in the article!

What Do You Think Beidou's Tier Is?

Beidou is known as one of the powerful, unbound and forthright woman in Liyue. Known as a liquor lover, she spends her spare time drinking. She is a trusted leader to her crews where they put their full trust and loyalty to her. She is also a good friend of Ningguang, Yoimiya and Kazuha.

Beidou is the captain and the owner of the famous Crux Fleet that is based in Liyue region. She and her Crux Fleet became a trusted trade partner with the other nations, especially in Inazuma.

Beidou Is Affiliated With Kazuha

She played a big role at Kazuha's life by saving him during his escape from Inazuma. Beidou welcomed him to join his fleet and be a part of her Crux Fleet family.

How Tall Is Beidou?

There is no in-game and official data regarding the height of Beidou. We compared characters and Beidou is Tall comparatively.

How To Get Beidou?

Get Beidou From Wish Banners

You can get Beidou through by pulling from Wish Banners. There are a number of banners wherein Beidou is a rate-up character

would the unforged not be good for beidou? i just got it and i'm not sure who to give it to...

is there other battery users instead of Fischl? I missed the event when she was in free.

Fischl was free last patches. Not this patch, so if you start recently, you cant get the free fischl last patches

Fischl is not F2p? Why is she on the F2p team for beidou?