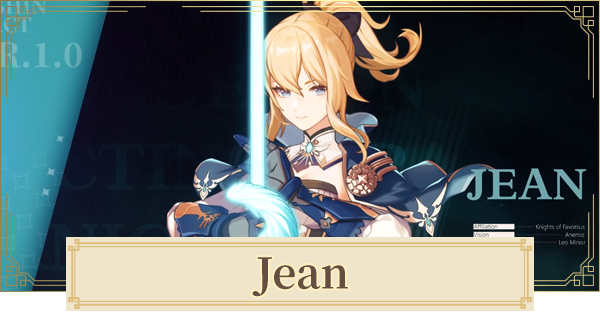 Make sure to balance your CRIT Rate and Ration to 1:2.

This build focuses on using Jean's Anemo Skills to deal powerful DMG and provide Anemo Debuff provided by Viridescent Venerer Artifact. She will not only have powerful heals but also Powerful Swirl DMG in this build.

Jean is a versatile character that can easily fit into any team comp. Due to the nature of her Elemental Skill and Elemental Burst, she can work both as a sub-dps or main support

Performs up to 5 consecutive strikes.

Consumes a certain amount of stamina to launch an enemy using the power of wind. Launched enemies will slowly fall to the ground.

Focusing the might of the formless wind around her blade, Jean releases a miniature storm, launching enemies in the direction she aims at, dealing massive Anemo DMG.

At the cost of continued stamina consumption, Jean can command the whirlwind to pull surrounding enemies towards her front.
Direction can be adjusted. Character is immobile during skill duration.

Calling upon the wind's protection, Jean creates a swirling Dandelion Field, launching surrounding enemies and causing Anemo DMG.
At the same time, she instantly regenerates a large amount of HP for all party members. HP restored scales off Jean's ATK.

- Continuously regenerates HP for one ally and continuously imbues them with Anemo.
- Deals Anemo DMG to enemies entering or exiting the Field.

Hits by Normal Attacks have a 50% chance to regenerate HP equal to 15% of Jean's ATK for all party members.

Using Dandelion Breeze will regenerate 20% of its Energy.

When a Perfect Cooking is achieved on a dish with restorative effects, there is a 12% chance to obtain double the product

There are few supports that can increase the DMG of Anemo in the game, one of them is the constellation 4 of Jean which decreases the Anemo Resistance of enemies in her Elemental Burst by 40%.

How To Use Jean ?

Jean's Elemental Skill will deal Anemo and Swirl damage to enemies it hits. It's pretty fast and is an easy way to gather particles since it's a low-cooldown Skill.

If you hold down Jean's Elemental Skill, she will gather enemies and when released, will throw enemies. The amount of time Jean can hold enemies depends on her stamina.

Jean's field when she uses her Burst will apply Swirl damage to enemies going inside and outside of it. It will also have infusion if another element is present on the field.

Jean will deal an initial Anemo damage upon using her burst. It's relatively high damage and if built like a main DPS, can deal extremely high Anemo damage.

Burst Heals All Members Of Party

Jean's Burst will heal all party members, whether they are on the field or not. Her on-field Burst will also give healing to characters standing inside of it.

Jean is a unique blend of Support and DPS character since her healing and damage both scales through her ATK. She can easily fit in any team comp, and will be just as effective in any of them.

Jean's Burst Healing is one of the most effective in the game. Since her Burst's field also heals, she can fully carry a team's survival.

Since Jean's Skill pushes back enemies when used, it can easily disrupt combos. It also does not push back all enemy types so it can't be used to crowd control all the time.

Swirl Is Not Consistent

Jean's Swirl application is not the best out of Anemo users since her Skill only does one short Anemo damage. Her Burst has multiple swirl tics, but since enemies can just walk out of it, it's inconsistent.

Jean Reviews From Other Users

Comment or send your opinions about Jean in the comments or feedback for a chance to be featured in the article!

What Do You Think Jean's Tier Is?

Jean is a young woman of honor and righteousness, having been dubbed the Dandelion Knight. As an anemo user, she uses wind to defeat enemies and heal her allies.

Acting Grand Master Of The Knight's Of Favonius

Jean's grandfather and the current Grand Master of the Knight's of Favonious set off in an expedition, leaving her to be it's acting leader in his absence. As acting Grand Master, Jean takes all tasks with equal importance, which is admirable and worrying for her colleagues.

Revealed To Be Barbara's Sister

It was confirmed later on that Barbara and Jean are actually sisters. They both have different last names to their parents seperating. Jean stayed with her mother and adapted the Gunnhildr name, while Barbara was left with her father thus having the last name Pegg.

How Tall Is Jean?

There is no in-game and official data regarding the height of Jean. We compared characters and Jean is Tall comparatively.

How To Get Jean?

Get Jean Through Wish Banners

Jean doesn't have her own character wish banner, however you can still obtain Jean through these permanent banners: Wanderlust Invocation! and Beginner's Wish.

Obtain Jean Through Other Character Banners!

You can also get a chance to pull Jean through other characters' banners. Jean's drop rates will be boosted depending on the banner.

You should definitely update this guide with Amenoma which is pretty much her BiS as sub DPS\support.

You mention Jean getting stronger after complete Ascension, however the stuff mention was not ascension talents but constellations. Should correct that section.

Jean's Healing does not get increased by 4 piece Gladiators.