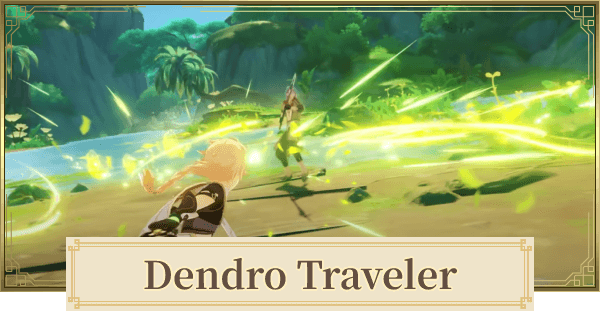 This build focuses increasing the reaction damage that Traveler will produce. This is a great build if you are going to use Traveler for Dendro reactions like Bloom.

This build focuses on increasing the personal Dendro damage of Traveler. This is great when using the Dendro Traveler as a secondary DPS that is only on field to unleash Elemental Skill or Burst.

To increase the damage from dendro reactions, increasing Elemental Mastery is recommended. Energy Recharge is also good for stability of Elemental Burst.

Energy Recharge Is Important For Up-Time Of Elemental Burst

To maximize the damage from Dendro reactions, Elemental Mastery is important. Energy Recharge is also crucial for up-time so try to reach 180 Energy Recharge above. This can be done through weapons and substats.

To maximize the damage from Dendro reactions, Elemental Mastery is important. Energy Recharge is also crucial for up-time so try to reach 180 Energy Recharge above. This can be done through weapons and substats.

Other Characters That Works With Dendro Traveler

Traveler will deal a frontal slash dealing one shot of Dendro damage in a small AoE in front of him. Other than damage dealing, this skill also is the main source of energy particles for Traveler.

Dendro Traveler's Elemental Burst will deal continuous Dendro Damage to the enemies within its AoE.

Once The Flower Bud Contacted With Other Elements, It Produces Different Effects

Based on the combination and team, the effect of the elemental Burst of Dendro Traveler changes.

Should You Get Or Wish For Dendro Traveler?

Collect All Dendroculus For Constellations