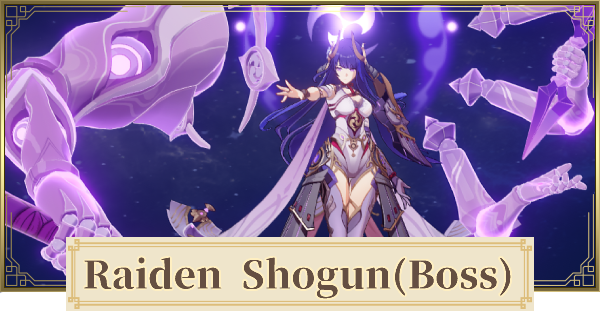 Raiden Shogun boss fight along with the The End of the Oneiric Euthymia domain is unlocked upon completing Raiden Shogun's Story Quest Act II. The domain will show up on the map and will become a waypoint.

The only way to shield through Raiden Shogun's one-hit attack is to create a shield by destroying the Flowers of Remembrance. It can be destroyed with other attacks, but Electro attacks break it easier.

Although Shields will not save you from Raiden Shogun's one-hit attack, they are still viable against most of her other attacks. It's better especially if you are not that good at dodging.

Raiden Shogun will be able to provide good damage for the whole team. The Electro-focus of the team also helps to get shields faster during the one-hit attack.

The team will create enough reactions to deal big damage to the team. Kujou Sara can then be used to amplify the team's damage and destroy the flower. However, lack of shield will mean needing to dodge well during the fight.

Raiden Shogun fights with her sword and she's very effective against. Most of her melee attacks are whole attack strings, meaning it doesn't end with just one hit. Either shield yourself or be ready to dodge through her attacks.

At one point, Raiden Shogun will create illusions of herself. During this phase, she cannot be attacked until you find her. Having long-range here works well since you can pick off the Illusions from a distance.

If You're Too Far, Raiden Shogun Will Dash To You

Staying from long range isn't a good idea either. Raiden Shogun will dash at you with a big swipe of her sword, dealing big Electro damage. Be prepared to dodge because she can combo this with another string of attacks.

Raiden Shogun will bring down lightning in a circular pattern before she unleashes electro slashes in a wide range. Wait for the Electro circle to fully light up them prepare to dodge once she brings down her arm.

The Electroculi will require players to continuously attack it to destroy. It's better to use your Normal Attacks here to quickly destroy it and prevent the attack from activating on you.

The only way to save yourself from Raiden Shogun's one-hit attack is by destroying the Flowers of Remembrance. It will create a shield that will protect you from the attack. Note that shields from other sources cannot tank this.

Pyro Is Great To Remove Her Electro Infusion

Thanks to Overload's damage, Pyro really does a great job to remove Raiden Shogun's Electro infusion during this phase. Cryo also works but expect no additional damage from Superconduct.

Raiden Shogun will summon a field of lightning that will follow you and deal continuous Electro damage. Keep moving in order to escape from it. If you stay still, it will explode around you.

The Electro towers that Raiden Shogun creates will continuously dish pulses of Electro. Escape this by jumping whenever the pulses are about to pass through you..

Move Away From Sword Swing's Trajectory

Before Raiden Shogun brings down her sword, a recatangular outline will show up on the floor to show where her attack will hit. Simply move out of its way to not be hit.

Characters That Use Raiden Shogun's Drops

Just like other Weekly Bosses, claiming the rewards will require resin to revitalize the Ley Line Flower. The first 3 Weekly Bosses will cost 30 Resin and the remaining will be 60 Resin.

Original Resin Guide - How To Use

Can Only Claim Once A Week

With Raiden Shogun being a Weekly Boss, you can only collect rewards from her Domain once a week. Reset happens every Monday at 4AM server time.

Confirmed As Part Of 2.5 Update

Although still unnamed, the supposed Raiden Shogun boss fight has been confirmed to be part of the 2.5 Update. In the 2.5 Livestream, a short snippet of the boss fight was shared.

The Raiden Shogun Boss Fight is closely tied to the story of Raiden Shogun's Story Quest Act II. During the quest, we find out why we must fight the Puppet and what it means for the real Raiden Shogun, Ei.

The Guardian Of Eternity

You are not fighting Raiden Ei, but rather her puppet, Raiden Shogun. She who served as the guardian of Eternity while Ei stayed in the Plane of Euthymia now stands before you in a final stand for the ideals of Eternity.

Culmination Of The Inazuma Storyline

With Ei finally accepting to move forward, Raiden Shogun stands as the final trial to her. Although not malicious, Raiden Shogun fights the Archon in order to stand for the ideals that was entrusted to her. To change them, she must be defeated.

Nilou also uses this drop for some reason