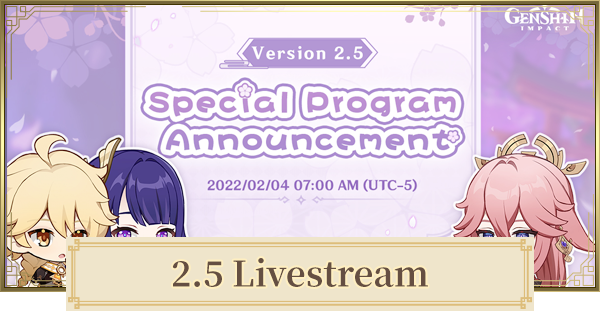 The special program for Genshin Impact's new version will premiere on the official Twitch channel on 02/04/2022 at 07:00 AM (UTC-5), followed by an online concert, bringing you a joyous time with beautiful melodies!

Check our latest updates, fun facts, infographics and other contents on our Genshin Guide Twitter!

Yae Miko, the head priestess of the Grand Narukami Shrine is confirmed to be the new Genshin Impact 5★ character that is set to be released on the 2.5 Game Update.

For the new skins, nothing was mentioned regarding the new character skins or even that alternative outfits.

Note: The Chasm was only shown in the 2.5 Livestream, however it will not be included in the 2.5 Game Version.

A Preview Of The Chasm

During the livestream, Mihoyo gave us a snippet of what does The Chasm looked like, however the release date for this area was not disclosed.

The new Raiden Shogun Boss was shown during the livestream. This new boss domain will be available soon in the upcoming 2.5 Update!

A new enemy that was introduced in the livestream event that is located in the depths of The Chasm, however this new enemy is not included in the 2.5 Update.

A continuation of Raiden Shogun's story quest that will serve as the second chapter of Imperatrix Umbrosa. This might tie up with her upcoming Boss domain.

Yae Miko will have her own story quest for the upcoming 2.5 Update. Her own story can be also connected to the Raiden Shogun's story and the history of Inazuma.

A new Bartending Event that involves unlocking new character voicelines as a reward upon creating your own drinks or liquor that you will present to your favorite characters!

Create your own domains and challenge your friends to clear them in this supposed upcoming event!

According to the livestream, in this event the Travelers must light up the darkened Enkanomiya using the Bokuso Box and will feature a new 4-Star catalyst weapon and it's refinement material.

Hyakunin Ikki will be having a rerun according to the livestream, and it will be available on the 2.5 Update.

The talent farming event will have a rerun! Claim double the amount of talent books from the talent domains, and it will be available on the 2.5 Update.

You can check Yae Miko's Banner details here once it is announced and released!

You can check Kokomi's Rerun Banner details here once it is announced and released!

You can check Raiden Shogun's Rerun Banner details here once it is announced and released!

Two new Catalyst weapons will be released in the 2.5 game update.

There are no new system or functions mentioned during the livestream.

When i began playing Genshin, it was at the end of Raiden's Banner, didn't get her. Now, its my redemption arch