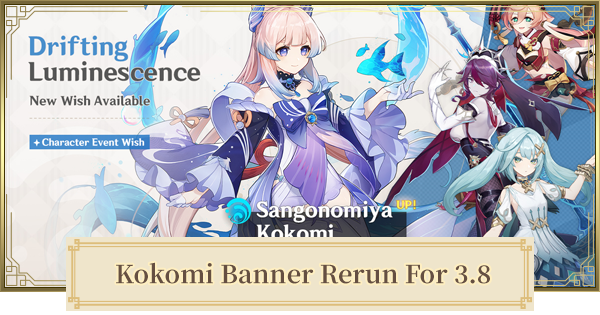 It was announced that Kokomi will grace us once again with her presence on Version 3.0. She will have a rerun with Ganyu and will be the second batch of banners for the version.

A Double Banner With Ganyu

Sangonomiya Kokomi and Ganyu's banner will be released at the same time for the 2nd phase of 3.0 Update. They will be sharing the same Pity counter and 4-star characters.

Between Kokomi & Ganyu, Which Will You Pull?

Who Is Sangonomiya Kokomi?

She is the Divine Priestess & The Supreme Leader of Watatsumi Island. She is amazingly known for strategizing battle plans and other military affairs. She also handles Watatsumi Island's domestic, diplomacy, and other affairs related to her island.

Try your luck and see if you can pull Kokomi from our Kokomi Rerun Banner Gacha Simulator here!

Should You Roll For Kokomi?

Kokomi is one of the best healers in the game as her Elemental Skill can give huge amount of healing that will based on her Max HP per tick. In addition to building her using the Ocean-Hued Clam artifact, she will finally deal damage while healing!

Kokomi's Healing is very strong if she's built as a healer. She can easily support her team with her healing skills. She is also good as a hydro enabler as her Elemental Skill has almost 100% uptime and can also apply hydro with her normal attacks.

Kokomi can effectively be an enabler or healer. She can effectively support the team with her consistent hydro application while giving powerful heals that can easily keep the entire team's HP full. She also has a low internal cooldown which is great with Dendro reactions.

A good support electro Claymore character from the Sumeru nation. Dori summons its Jinni on the field that can connect to nearby characters. It will constantly regenerate their HP & Elemental Energy and also inflict damage to enemies.

Xingqiu is one of the best Hydro Support in the game. He can reduce hydro resistance while in combat and his skills are both amazing in offense and defense.

Sucrose is a good Anemo Catalyst user who has the ability to gather enemies together. She can be a decent addition to your team when it comes to optimizing Elemental Combos! Sucrose also conducts Elemental Mastery buff to all party members once you unlock her talent "Mollis Favonius".