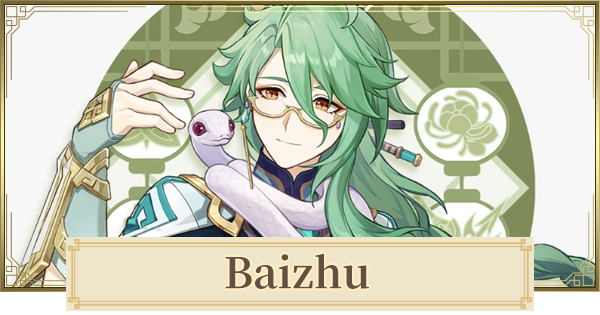 Baizhu is a character in Genshin Impact. Guide includes who is Baizhu, story, character relationships, profile, affiliation, personality and more!!!

Baizhu has not been officially announced as a playable character and does not have a definite date of release. Since there was no new 5 Star character released in the 1.4 Update, it's speculated that a new one will be released in the next update and it could be Baizhu.

Based on the scheduling of previous major updates in Genshin, the 1.5 Update could be released on April 28, 2021 (Wednesday). This follows the announced update schedule for Genshin with one coming out every 6 weeks.

Baizhu was shown in the main story to possess a green gem with a Dendro mark in it. This maybe the first Dendro vision showed in-game.

Could Incorporate Pet Snake In Skills

It was announced that the official japanese voice actor for Baizhu is Koji Yusa. Some of his works includes voice acting for Bleach, Eyeshield 21, and Hakuoki.

No Voice Actors For Other Languages Yet

Although Baizhu was voiced during his short appearance with Qiqi, his official voice actors for other languages has not been revealed.

Check Out The Keqing Guide Here

Check Out The Qiqi Guide Here

Check Out The Xiangling Guide Here

Check Out The Xiao Guide Here