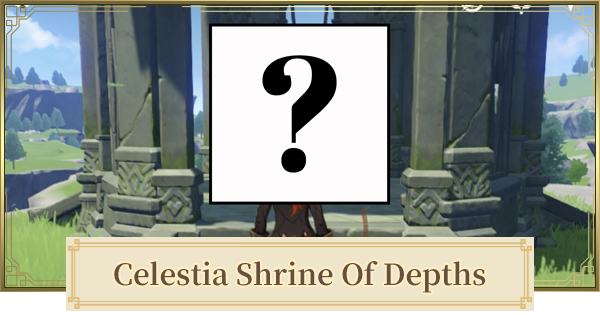 Note: This article contains rumors and speculations regarding the Celestia Shrines coming from the Genshin Impact fan community, thus we will update this once it is officially confirmed by Mihoyo.

Celestia Shrines might be similar to the ones he already interacted with around the regions of Mondstadt, Liyue, and Inazuma. We will get to encounter these shrines again once this region is officially available, so check back again to get more updates!

This section is based on the other shrines that was released in the game.

Increase The Level Of The Statue

Similar to the other nation's Statue of Seven, in order to level up the statue, players will need to find an oculi for the offering. Upon reaching a certain level, players can obtain shrine keys as part of the rewards.

Completing either an Archon, a World or a Story Quests in order to get keys as one of the rewards.

How To Use Shrine of Depths Keys

Stand In Front Of A Shrine And Open It

Using a key is simple: stand in front of the shrine you want to enter and select the Confirm button. You'll be able to enter the Shrine this way and get access to its treasure chest!

Once you use use a key and open a Chest inside a Shrine, it will not respawn again. Since you can only get these chests once, make sure to treat their contents carefully!