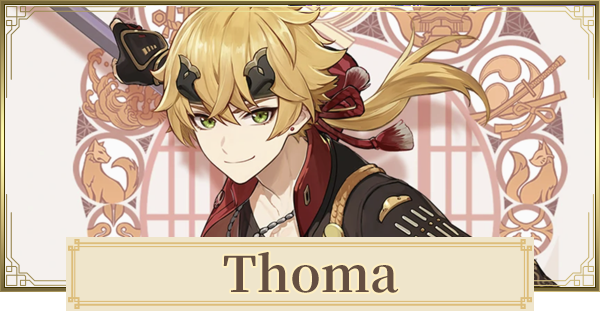 This build will allow Thoma deal a ton of damage through Burgeon rather than his raw damage. Elemental Mastery will increase his Burgeon DMG while Energy Recharge will ensure good uptime for his Burst.

This Shield Support build will allow Thoma to provide strong shields for his team. By increasing Thoma's HP through artifacts stats, you ensure that the shield will tough since it scales off Thoma's HP.

Since this build is focused on Burgeon, you don't need Crit Rate, Crit Damage, or even attack. You just need to build as much Elemental Mastery as you can so having a good EM Weapon is important.

For this build, having a good Energy Recharge and HP weapon is best. They is a 5-star ER weapon, but it's better to give it to another character than Thoma since he can work with the recommended 4-star weapons.

Gilded Dreams Is Best For This Build

For this build that's focused on Burgeon, the Gilded Dreams 4-Piece set is perfect for it. If you're finding it hard to build the set, you can opt for 2 pieces of Gilded Dreams and Wanderer's Troupe while you farm for the whole set.

Build As Much HP & Energy Recharge As You Can

Other Characters That Work With Thoma

Notes About Team Comps For Thoma

Thoma has a very limited pool of characters he can work with due to his kit working best with those that deal Normal & Charged Attacks. There's also the concern that due to his Pyro application being relatively slow, he might end up stealing reactions, lowering the team's DPS.

Thoma Guide - How To Use Thoma?

When Thoma uses his Elemental Skill, it creates an on-field Pyro shield. This shield scales off his HP so the higher the HP, the tougher the shield is.

Thoma will kick upwards during his Elemental Skill. This kick is powered by Pyro, applying the element to those it hits.

Just like his Elemental Skill, Thoma's Elemental Burst creates an on-field shield. This actually stacks on top of Thoma's Skill's shield so you can have two shields at once.

While the Elemental Burst and Elemental Skill shield is active, every normal attack and charge attack you do will release a wave of Pyro dealing damage to enemies. This remains even after switching making it great for dealing Pyro-related reactions.

Should You Get Or Wish For Thoma?

Pull If You Need A Pyro Applicator & Shielder

Thoma is a reliable shielder with both of his Elemental Skill and Elemental Burst providing on-field shields. However, he doesn't have good damage multipliers and his Pyro application is too long. He did find a new niche in Burgeon teams, making him a must have for those comps!

Thoma, having 80 Energy Cost for his Elemental Burst, suffers from needing Energy Recharge. This problem will be eased by unlocking Constellation 4 which will give him extra energy. The first two constellation will also make his shields more consistent.

Where do I get a second Xiangling for the F2P team?

Enough you with your theory damm1t.

I just bring Thoma with HP-ER build to floor 12-2 and 12-3 and protection from him is bad, the entire damage from his burst also disappointing.

is it good with Thoma?