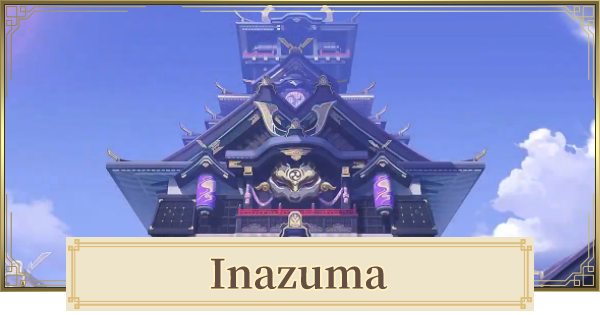 Genshin Impact
Inazuma How To Unlock & Things To Do | Gimmicks & Map

Inazuma How To Unlock & Release Date

Inazuma Will Be Released In Version 2.0

Upon finishing this quest, a new quest will be prompted that will let you access Inazuma.

Located Beyond The Seas Of Liyue

Inazuma is an archipelago based on the real-life Japan. It is located beyond the seas of Liyue.

Things To Do At Inazuma

Explore Inazuma and collect Electroculus to offer them to the Statue of Seven for generous rewards. Use our Electroculus Interactive Map if you are having difficulty collecting them all!

Increase The Level Of Your Sacred Sakura

Collect Electro Sigil from treasure boxes and quests while exploring Inazuma and offer them to Sacred Sakura to level up your Electrogranum level and receive generous rewards.

Upon arriving at Kamisato Estate, talk to Madarame Hyakubei to unlock Inazuma Reputation. Do quest, bounties, and request to increase your reputation and get amazing Gadgets, blueprints and Gliders!

Get 40 primogems for every Shrine of Depths opened together with valuable materials. Use our Map to track all of their locations.

Inazuma, like Mondstadt and Liyue, will have its own domains that will drop talents, artifacts, level up materials and more various rewards. They are challenging to unlock compared to Mondstadt and Liyue so if you like exploring and puzzle solving doing some domain exploration is recommended!

Many challenging quests are released in Inazuma. Learn more about their culture and citizens by playing various quests.

Collect The Blueprints For Inazuma Weapons

Upon exploring the region of Inazuma, players will find a mysterious combination of mechanisms. These are not your ordinary mechanisms that we had encountered in Mondstadt and Liyue.

In addition to the Relay Stone, if a player or nearby enemies are imbued with Electro, they can conduct eletricity emitted by the Discharge Stone!

It is highly recommended to search for the Sacred Stone Mound first! and then deduce the electro route by adjusting the direction and elevation angle of the device! These devices can be found on Yashiori Island.

Electrograna is a grana, same as the Anemograna and Geograna. Electrograna will be a valuable companion of each player around Inazuma.

How To Obtain Electrogranum?

Simple, Electrograna can be found on the various islands inside Inazuma and can be extracted through the tree called Thunder Sakura Bough.

How To Use Electrogranum

Upon exploring Inazuma, Electrograna can provide with various benefits, such as the following:

Take note and remember these symbols as they represent the strenght of each Thunder Barriers.

Thunder Barrier contains Thunderstone that will inflict damage towards players, but if players are equipped with Electrograna it will suppress its power in order for the players to pass through the Thunder Barriers.

Enetring an electro affected vicinity will cause players to gradually lose HP, players will need to equip the Electrograna in order to avoid losing hp while traveling to these electro affected areas.

A ruin device that can detect the directions of Electro Elements such as, if a player or monsters are in the electro-affected area, the pointer of the device will turn and point into the player or the monster's direction.

Make these cubes face the same direction and you will get a reward!

Electro Sigils has a different usage compared to the Anemo & Geo Sigils. Players will get a chance to see and obtain these sigils upon exploring the Inazuma region and offer it to the Sacred Sakura to increase your favor and obtain various rewards in return.

Just like the seelies we see around Mondstadt and Liyue, they have the same function with the Electro Seelie. Follow these seelies and they will lead you to discovering treasure chest!

Electro Pile Stones around Inazuma are a bit different compared to the ones we see in Mondstadt and Liyue, interacting with these electro pile stones might need some elemental reactions for players to open the treasure chest inside it.

Bake-Danuki is similar to the Money Squirrel that can be seen in Mondstadt and Liyue, this creature can also transform into other objects so pay attention once you spot one along Inazuma!

A teleport ruin device similar to the teleport waypoints we use, and it only exist in Seirai & Watatsumi Island. Tricky part is, players will need to use their Elemental Sight i order to locate these devices.

A new Inazuma gimmick in sight! An ELectric Lamp that is only located at Watatsumi Island. Summon an electrograna in order to light the electro lamp. Some lights must be lit in a certain pattern.

Players might get a chance to meet these mysterious pillars scattered in the island of Watatsumi, interact with it and they will change the appearance of the surroundings, follow the hints and continue exploring the mysterious pillars and it might have give players something!

As with every major content update Genshin receives, we can expect to see several new characters added to the game!

Was shown during the 2.0 Livestream. Kujou Sara is well known as a Tengen Warrior, the General of the Tenryou Commission and loyal to the Raiden Shogun (Baal) .

During the recent 2.0 Livestream the developers gave us a glimpse of the upcoming characters for 2.0 Update and one of them was Gorou, the one Kazuha mentioned that he is indebted with his life and also considered him as his friend.

Thoma was shown during the 2.0 Livestream. Developers gave us a teaser of what to expect to his character. It is stated that his identity is still unknown but he is currently the Chief Retainer of the Kamisato Clan.

Shown in the 2.0 Livestream. She is the leader of the Sangonomiya Resistance, a military advisor.

A Ronin from Inazuma who is now traveling at Beidou's Crux Fleet. He is released as a character for version 1.6.

One of the main figures of Inazuma which is a Cryo and Sword user. She also appeared in the first Beta of Genshin.

A fireworks master who wields a Pyro vision and a bow. She is one of the characters announced to be part of Inazuma.

A ninja in Inazuma with a racoon themed costume. She is the first Claymore anemo character which is a surprise because of her small stature.

Scaramouche, one of the Fatui Harbringers, first introduced himself as a Vagrant of Inazuma. Many assume that he will be one of the main villains in the Inazuma area.

In the final part of Liyue's main story, Zhongli mentioned a bit of information about Inazuma's Electro Archon, Baal. She also has several titles such as the Shogun of Inazuma Bakufu.

Just like Mondstadt and Liuye, Inazuma is expected to have the same city reputation system which includes NPC requests, world exploration, bounties, and rewards!

The Thundering Pulse and Mistsplitter Reforged are the newly introduced 5-star weapons for the upcoming 2.0 Update!

Here are the new 4-star weapons that was also shown during the 2.0 Livestream and expected to be released alongside with the Inazuma region.