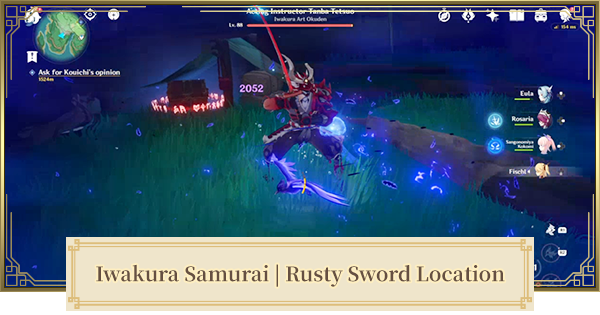 Rusted Blade is a hidden achievement for Genshin Impact! Guide includes Iwakura Samurai location, achievements, Hakuen Michimitsu Amenoma, rewards, where to find and how to use rusted blade!

What Is The Rusted Blade?

A Rusted Blade can be found near the entrance of Enkanomiya. This achievement can only be done after hunting all of the Iwakura Samurai.

You can acquire a hidden achievement after defeating all of the Iwakura Samurai. Head to Enkanomiya and obtain the Rusted Blade near the waterfall.

How To Use Rusted Blade

▲ This map displays the locations of all the Iwakura Samurai

Please note that numbers 6 and 7 will only appear after defeating the first 5 Iwakura Samurai. If a Samurai doesn't appear in a location, then you might have defeated it before.

You should be able to find him wandering around the shore.

Go to the top of the mountain near the waypoint. He should be beside the tent.

You can find the third samurai by descending down a hole specified on the map. The location can be hard to find so please refer to the detailed procedure below.

You should see a boulder atop the plains with a blade mound near it. The samurai should be right beside it.

Use the teleport waypoint near the Perpetual Mechanical Array instead of the domain. Head down the basement from the waypoint and you should find him near the remains of a ship.

The sixth samurai can be found at the top of a mountain. Make sure you're prepared before talking to him since you will fight him after the dialogue.

This Samurai will only appear after defeating the first 5 Samurai. Be sure to complete all of them first!

Head back to the location of the blade mound (location of the fourth Samurai). You should be able to find two Samurai near the mound. Talk to them and prepare for a battle.

After defeating the two Samurai in the last location, you will need to put the 2 blades you obtained from them in the blade mound to spawn the chest.

After defeating the two Samurai in the last location, you should be able to earn the "Iwakura Out" achievement.

You can get the "Ill-Starred Legacy Of Iwakura" achievement by putting the rusted blade that you obtained in Enkanomiya in the blade mound.

whoa why would there original sword be in enkanomiya?