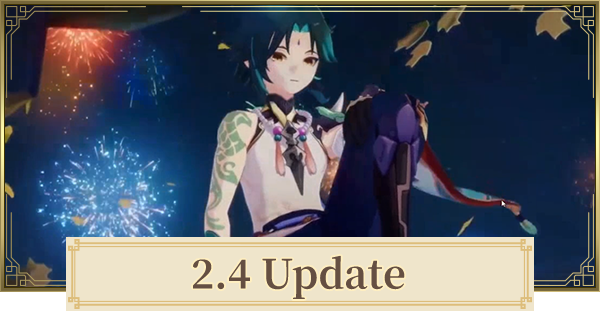 Since the introduction of 2-Character Banners in 2.3, we will also be getting more of them for this version. For the first half, we will be getting Xiao's Rerun Banner and Shenhe's Banner.

Remember that the 2-Character Banners will share pity / pull count. Be sure to keep in this mind when pulling for the corresponding banners!

For the second phase of 2.4, Zhongli and Ganyu will have a rerun banner. Both banners will be featured simultaneously!

Check below for details on Ganyu's Rerun Banner!

Check below for details on Zhongli's Rerun Banner!

Vishaps are creatures that dwell beneath the oceans. They are said to be found in the depths of Enkanomiya Island.

It was seen from the livestream that there would be a new enemy from the Abyss. Pyro Abyss Lectors deal delayed burst of damage regardless if characters. are shielded or not.

Under the recent Inazuma Diaries, new specters with Electro, Pyro, and Cryo elements will be released for the 2.4 game update as one of the new enemies in the game.

It was announced in the 2.4 Livestream that there will be an all-new world region called "Enkanomiya". It is located in the abyss below Watatsumi Island.

Enkonomiya Release & How To Unlock

The Lantern Rite Event will be back for Version 2.4 with tons of new events and rewards to offer!

Just like the first Lantern Rite, you can invite any 4-star Liyue character of your choice. Complete the quest "The Stars Inscribe The Year's Wishes" and collect two kinds of event currency to unlock this event.

During the Lantern Rite Event, Travelers can obtain Ningguang's skin, "Orchid's Evening Gown" for free upon completing all the conditions for "The Moon's Comely Brow". Keqing's skin can be purchased at a discounted price from the shop.

May Fortune Find You

During the Lantern Rite Event, another daily-check in event will be present and award Travelers 10x Intertwined Fate just for logging in!

During the event, log in to the game to receive Fragile Resin, Intertwined Fate, and other rewards!

A Study In Potions

Help Timaeus complete his line of research in attempting to create a legendary alchemical medication and obtain rewards!

A Study In Potions Guide & Reward

Eight Locales Over Mountains And Seas

Take part of the event with the famous Inazuman creature, Kichiboushi the Tanuki. Show Kichiboushi the different local practices in every nation in Teyvat! Complete this event and obtain rewards!

The Lantern Rite Gifts is a new log in event released in the 2.4 Update. Log In for 5 days to get rewards straight to your mail as part of the event!

The classic Hide & Seek game will make its return for version 2.4! Play with your friends or with other travelers in Co-Op and obtain rewards!

There will be two (2) new hangout events for the 2.4 update which involves Liyue characters Ningguang & Yun Jin. Complete their Hangouts to earn rewards!

Players can now add background music for their Serenitea Pot by purchasing music-related furnishings from the Depot.

The Calamity Queller is a Polearm and said to be Shenhe's 5 Star BIS weapon. It is assumed to be available in the weapon banner along with Shenhe's Banner.

Calamity Queller How to Get & Is It Good?

The Crane Returns On The Wind will be available in the Version 2.4 Update. It will require completing previous Archon Quests to unlock.

The Crane Returns On The Wind How To Unlock & Rewards

These (2) two new furnishings are created by Tubby herself, and it is made from the Scoreboard and Flash Step components. More furniture will also be added for this version!

A quest item that can be obtained through completing the Hyperion's Dirge. After getting the item, it will be used as a final material needed in the quest called The Phaethons' Syrtos.

Will there be a ganyu rerun?