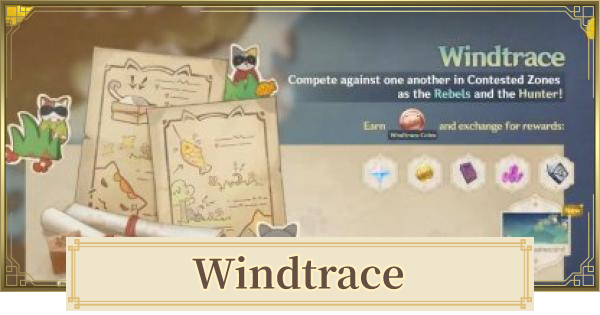 It was revealed during the 3.3 Livestream that Windtrace will be returning to the game for the 3.3 Update, however the release date was not disclosed.

The Illusory Beacon can be used only once you are caught by the hunter (Observer Mode). This feature will let you help your teammates by placing Illusory Beacons in certain places just to confuse the Hunter.

To claim the corresponding rewards, you must accumulate a certain number of Windtrace Coins. Additional Mora can be obtained by completing Windtrace Challenges.

The maximum number of Windtrace Coins you can get on the first day of the event is 1,200. After that, this amount will gradually increase for the next 6 days, up to a maximum of 6,000 Windtrace Coins.

Contested Zones will be randomly selected for the game when you play Windtrace. The Contested Zone can be unlocked by locating the Statue of the Seven in the appropriate area.

※ Contested Zones in Inazuma can only be unlocked by completing the Quest Ritou's Escape Plan and unlocking the Statue of the Seven in the area.

Once you join a Windtrace game, you will be randomly chosen as a rebel or hunter. As a rebel, you'll want to stay hidden from the hunters until the time limit and as a hunter, you will need to capture all rebels within the time limit.

Once a match has been successfully made, Travelers will directly enter the preparation interface where they can select their characters and Windward Arts they want to use before the game starts.

※ Take note that Kamisato Ayaka and Mona's Alternate Sprints cannot be used in this Windtrace.

During the preparation phase, Rebels need to quickly find a hiding spot, use their Windward Arts to disguise themselves as objects within the map, place bait, or cleverly use the environment to hide and evade from the Hunter.

During the preparation phase, the Hunter's field of vision will be obscured, and it will be impossible to to view paths that other Rebels take during the phase. After preparation, the stamina consumed by the hunter in sprinting, gliding, and climbing will be greatly reduced.

8 Maps To Play On

When you participate in Windtrace, a Contested Zone will be randomly chosen from among the areas that have already been unlocked. For this event, there will be new maps and disguises.

Unlock All Statue Of Seven For More Areas

This section is a work in progress. We will update this section once Windtrace is released!

During the event period, Travelers can take part in a game of Windtrace at Gygax's, and obtain Windtrace Coins to receive rewards such as Primogems, Talent Level-Up Materials, Character EXP Materials, and Mora.

We will update this section once the Windtrace Event is officially available in the game. Check back again to get more updates!

We will update this section once the Windtrace Event is officially available in the game. Check back again to get more updates!

Windtrace Will Return For Version 2.4

Windtrace's return was announced to happen on version 2.4 during the recent special program. It will feature brand-new locations where you can play hide and seek with your friends!

Travelers must complete Ritou's Escape Plan and unlock the Statue Of The Seven in Ritou to unlock Contested Zones in Inazuma.

The Immovable God And The Eternal Euthymia Archon Quest Walkthrough

This section is a work in progress. We will update the locations and hiding spots for the Windtrace event upon its release!

In A City Of Yore Concealed

Windtrace Event is announced to happen on May 14 and is one of the version exclusive event of version 1.5 of Genshin Impact.

Unlocks For Adventure Rank 20 Or Up

This event will automatically unlock for players that reached Adventure Rank 20. If you haven't reached this rank, follow the guide below to raise your Adventure Rank fast!

Adventure Rank | How To Level Up Fast

Talk To Gygax To Start The Game

You can start the game by talking to Gygax. You can opt to form a party beforehand or play with people randomly. However take note that you can only obtain Windtrace Coins when playing with randomly assigned players.

A Hide And Seek Game Between Two Teams

Windtrace is Mondstadt's History themed hide and seek game, where players are split between the Hunters that need to seek out all Rebel to win, or Rebel that need to hide a certain amount of time without being caught.

Take Control Of Hunter Or Rebel With Different Abilities

As a hunter, you'll get abilities that replace your elemental, normal attacks to spot & see through decoys set by Rangers. As for rebels, you'll need to rely on your decoy & invisibility cloak ability to stay ahead of the game.

Select Skills From The Event Page

5 Maps To Play On

A total of 5 maps that's based on real terrain of the game will be available for players to play on. Those that researched the map area ahead of time will be able to gain an upper hand in the match!

Unlock All Statue Of Seven For More Areas

You can only play at areas where Statue of Seven is already unlocked. Get more areas by interacting with Statue of Seven. The locations of it will appear in-map.

Use Skills To Hide From Hunters

Your attacks, while playing the event, will turn into different skills that can be chosen before the game starts. Hide in places wherein the item you transform into is not unusual and when the hunter is close, try to not move!

Transparency can help you run away from Hunters when they spotted you. Use Transparency during emergency situations.

Characters with small stature, like Qiqi and Diona, are difficult to find and can hide behind rocks or structures making it hard for the hunter to find them.

Mona One Of The Best Rebel

Mona is the fastest sprinter but also can disappear and remain underground with her special dash. Using Mona is recommended if you have her.

Hide Above Houses And Structures

People tend to not search above houses so it is recommended to climb and hide in those structures. So once the game start, quickly find a statue to hide on.

Use Transparency If The Hunter Is Close To You

Using Transparency will give you a relatively safe time to hide from the hunter. It is also recommended to use this to steal favor when it is closer to the hunter.

Got any other hiding locations? Share it with us in the ▼Comments below!

Role Is To Search For The Rebels

The role of hunters is to search for the Rebels as fast as possible. The faster you find the hunters, the higher the Windtrace coins that you will receive.

Imprisoning Curse almost makes it guarantee the character to capture one Rebel so use it when you only have one left. Use Sensor Aura while walking around the field and capture at least two.

Look At Where The Characters Are Heading

While waiting at the start of the game, adjust your camera angle to check where the rebels are heading. This is to give an idea where to find them.

Make Sure To Take The Special Favor

For Hunters, it is crucial to take the special favor to win. Once the favor pops up, prioritize taking it.

Use Sensor and Capture Interchangebly

Sensor and Capture has different cooldowns. Spam them while walking around the map to easily find the Rebels.

Get Additional Mora By Completing Challenges

You can get additional rewards by accomplishing challenges that will be available in the Event Page.

Players can earn Windtrace Coins which can be exchanged for rewards in the event shop by completing the conditions above while playing the game.

Use Windtrace Coins To Claim Rewards

Rewards include the following:

Windtrace Coins - How To Farm

Players are capped at earning 600 coins a day for the event. Once the cap is reached, players won't be able to gain coins even if they played the event mini-game.

Multiplayer - Only Get Coins For Random Matching

For multiplayer, players can only earn coins if you choose random matching. If you form a team with friends, you won't earn any coins after a match. However, this won't stop you and friends from having a friendly match of your own.

Get Rewards From Challenges

You can also get rewards by completing ▲Windtrace Challenges on Event Page.

Hiding up there in dragon spine is pointless since you’ll freeze to death. You will eventually need to go near a fire
That’s really the easiest field to win as a hunter

I freeze in dragonspine map how do i not?

this sport is kinda busted as u can use invi whenever the hunter comes and then glide from trees to trees, its kinda obnoxious kekw 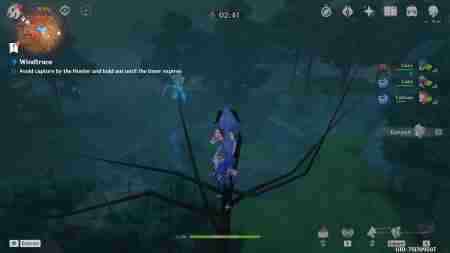 How many attempts can I do this event in a day until it stops giving me coins? Someone on youtube said 3 but I haven't found any article proving that yet.