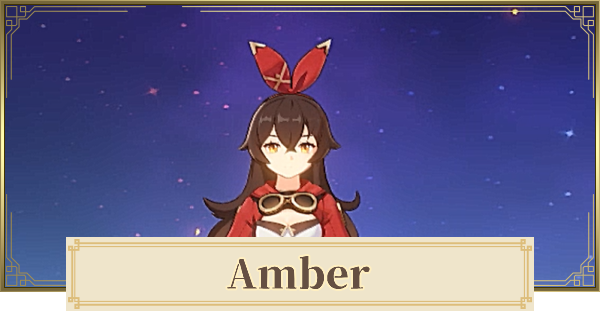 Amber’s Elemental Burst is able to inflict multiple counts of Pyro against enemies in an AoE. This build focuses ON increasing the damage and uptime of the Elemental Burst.

Build Up On Energy Recharge If Using Emblem Of Severed Fate

Amber can also be a Main DPS by investing on increasing the power of her Charged Attack or Aimed Shot.

There are strains in Amber's Kit, but she can work with the right team comp and build. For this specific build, she will work as a Burst DPS to deal high amounts of damage

Perform a more precise Aimed Shot with increased DMG. While aiming, flames will accumulate on the arrowhead. A fully charged flaming arrow will deal Pyro DMG.

Adjusts the throwing direction of Baron Bunny. The longer the button is held, the further the throw.

Every Arrow Finds Its Target

Aimed Shot hits on weak spots increase Base ATK by 15% for 10s.

Constellation 2 and 4 For DPS Amber

C2 will enable the Baron Bunny to deal devastating damage when its foot is hit by an arrow. Constellation 4 will decrease the cooldown and enable you to have 2 Bunnies at the same time greatly increasing the DMG of Amber.

At Constellation 6, Amber is able to increase Movement Speed (a rare buff) and the ATK of the team after casting her Elemental Burst.

How To Use Amber ?

Distract Enemies / Get Their Attention

Baron Bunny will take the aggro of enemies and distract them from attacking. You can either use it defensively to move away from enemies or offensively by gathering them in a single place to attack them.

Use To Gather Energy For Burst

It's important to use Baron Bunny as an opener since it will only provide energy once it explodes. Placing it early in battle will allow you to get energy early for your Burst.

Amber's Burst has the highest damage amplifier for a skill in the game. It's a great finisher to either multiple or solo enemies since it can activate reactions for high damage.

Amber's one of those characters that can perform high damage enough to one-shot some world bosses. It takes a bit of set-up, but as a free 4-star character, she works pretty well in it.

Can Work As Sub-DPS in Pyro-Focused Teams

Amber's support ability through Baron Bunny is a good addition to any Pyro-focused team. The Pyro resonance along with her crowd control ability will be beneficial to the team.

Baron Bunny Does Not Explode Quickly

Burst Is Multi-Hit And Can Easily Miss

Although Amber's Burst has high damage potential, it's plagued by it being a multi-hit attack. This means that enemies can get out of its range before all the arrows hit and halving the damage it can do.

Amber Reviews From Other Users

Comment or send your opinions about Amber in the comments or feedback for a chance to be featured in the article!

What Do You Think Amber's Tier Is?

An Outrider Of The Knights Of Favonious

Energetic and always ready to help, Amber is the one and only outrider of the Knights of Favonious. She's someone the citizens of Mondstadt could rely on to assist them with any cocern, whether big or small.

Introduced Gliding To The Traveler

Amber is a master glider so it's only fitting that she be the one to help the Traveler with their gliding. To be an official adventurer, she has to give the Traveler a gliding test that they would need to pass.

How Tall Is Amber?

There is no in-game and official data regarding the height of Amber. We compared characters and Amber is Medium comparatively.

How To Get Amber?

Obtain As A Free Character

Get her for free after completing the Prologue Act 1: The Outlander Who Caught the Wind, however you can still obtain Amber through the permanent banner and other featured character banners.

Characters With Same Element and Weapon As Amber

Guides is less than optimal if the goal is a damage carry Amber. Sharpshooter's Oath is one of the best bows for her sniper role.

Has anyone considered her ability to do more damage to weak points? I have her built for that and melt anything I can hit in the head.