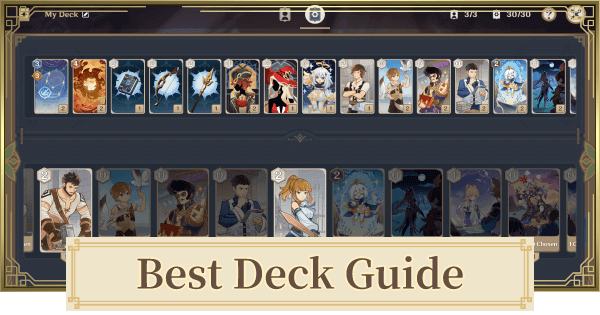 How to build Best Decks For Genius Invokation TCG Card Game? Learn how to build deck, card compositions, how to get strongest cards, best deck for PVE & PVP for Best Deck for TCG.

This deck can deal additional damage from triggering elemental reactions such as overload, electro-charged, & vaporize. The characters included in this deck can also inflict damage when ending turns.

If you did not initially get any of the mentioned cards above, choose Mona since her passive lets you set up 2 summons in 2 turns.

Switching from Mona to another character does not end your turn once per round. This is very helpful until you get and activate Katheryne Card. In addition, the effect of the mentioned card stacks with Mona's passive meaning you can switch twice in a round and still not end your turn.

It is strongly recommended to use Prophecy of Submersion Card when using Mona's Burst as it further amplifies Hydro-related reaction damage. Also, the buff gets transferred to the active character even when Mona has been defeated.

This card is very useful since it increases the usage of a summon by 1. It is recommended to be used on Guoba than Oz since Guoba deals 2 Pyro DMG which is higher than 1 Electro DMG of Oz.

If you did not initially get any of the mentioned cards above, choose Fischl to summon Oz then switch to Kaeya.

Damage All Characters All At Once

Keqing's Burst can deal AoE Electro DMG, Fischl's Skill can deal Electro DMG when the round ends, & the Cryo DMG from Kaeya is helpful for triggering superconduct which inflicts Piercing DMG.

The icicle from Kaeya's Burst deals Cryo DMG and can be triggered when switching between characters. You can maximize this effect if you have significant cards that are beneficial for switching, when overload gets triggered by the opponent, & if the opponent uses characters that forcefully switch your active character such as Sucrose & Jean.

You can get this card after using Keqing's Skill or Thundering Penance Card. It enables you to switch to Keqing for free and cast her Skill for a single turn. This is advantageous especially when Kaeya's Burst is active.

Go All Out For Keqing

It is recommended to make as many offensive moves as possible to maximize the +1 Electro DMG after using Lightning Stilleto Card.

Try the best decks for PVE and take on the Tavern Challenge!

The following decks are great for PvP because of the possiblity to finish the match within first few rounds. The included decks can either trigger Freeze & deal significant damage or hit like a truck when the setup is ready.

This deck includes Fatui Pyro Agent, Rhodeia of Loch, & Kaeya. It highlights Oceanid summon/s since it gives 1 shield point & deals Hydro damage when the round ends and you can easily trigger Hydro-related reactions such as freeze & vaporize which can deal more damage. Also, Pyro Fatui's passive gives initial shield points which is advantageous.

If you did not initially get any of the mentioned cards above, choose Oceanid to set up the summon/s then switch to Kaeya.

The Burst cost of Fatui Pyro Agent & Kaeya only costs 2 energies and can be used easily especially if you have Starsigns Card.

With 3 Pyro dice & 2 energies, you can easily use the Burst of Fatui Pyro Agent. When the Exile's Circlet is equipped, you can produce 1 energy for both of your standby characters which can be transferred to Fatui Pyro Agent using Calx's Arts for another Burst.

This deck includes Ganyu, Mirror Maiden, & Kaeya. It highlights Freeze that can halt the actions of the opponent. With Mirror Maiden's Refraction debuff, you can increase the dice used by opponent for switching to another character. This tactic is great for PvP since it can restrict the moves of the opponent.

How To Use Freeze & Forceful Switch Deck?

If you did not initially get any of the mentioned cards above, choose Ganyu to accumulate energy for Burst then switch to Mirror Maiden to freeze & apply Refraction debuff.

Freeze To Halt The Actions Of The Opponent

Once the active character of the opponent is frozen, the opponent only has 2 choices: either to switch to another character with additional cost or end the round to gain the first move on the next round. Ensure to sustain the freeze & Refraction in between rotations to gain the upper hand.

It is recommended to use this card to Ganyu's summon to increase its duration by 1 which is great since you do not need to switch to Ganyu & and use her Burst.

This deck highlights the overwhelming damage of Noelle with Wolf's Gravestone & Gambler's Earrings. Once the setup is ready, Noelle can decimate the opponent's character cards consecutively.

How To Use Funnelled Noelle Deck Deck?

With or without When The Crane Returned Card, initially pick Ganyu as you set up Noelle and accumulate energy for Burst. Ganyu's summon from Burst is going to help Noelle to trigger Crystallize and produce shield point for durability, and lower their HP simultaneously.

Ningguang Is On Standby

Since this deck is going to focus on Noelle mainly, Ningguang enables the use of Elemental Resonance: Woven Stone & Enduring Rock. Also, she acts as a back up in case Noelle gets defeated.

Reduce Opponent's HP To At Least 6

The passive effect of Wolf's Gravestone Card is only active when the target has 6 HP or lower. Ganyu's Burst is advantageous in this case since her summon can inflict Piercing DMG.

When I Got Your Back Card & the shield from her Skill are both active and she performs a Normal Attack, all of your character cards recovers 1 HP.

The effects of Ellin Card & Minty Meat Rolls Card can reduce the cost of Normal Attack which enables Noelle to perform as many Normal Attacks as possible when going all out.

Accumulate As Many Dice As Possible

Having many dice in a single round lets you do many actions as possible. This is very crucial in this deck as you complete Noelle's setup and when going all out.

Best Deck Depends On The Character You Want To Use

For Genius Invokation, you would want to focus on a character and insert supports, equipment cards, and other action cards around it. Spreading your hand to different characters would make your attacks weaker and difficult to control.

Number Of Cards In A Deck

Keep in mind that a complete deck consists of 3 Character Cards & 30 Action Cards, which include Equipment, Support, & Event Cards.

Consider The Strengths & Weaknesses Of Your Deck

Any deck has advantages and disadvantages against another player's deck. Be mindful of the elemental reactions and the synergy your deck can do since there are a lot of cards that you can use.

How To Get More Cards

You can get the Character Cards by inviting different characters using Match Invitation Letter, and win the duel against them. As for Action Cards, you can buy it using Lucky Coins from Prince in The Cat's Tail. You can earn Lucky Coins by defeating NPCs.

How To Get Cards In Genius Invokation?

You need to include 30 Action Cards in your deck and use the cards that are beneficial for the 3 Character Cards as much as possible. You can also use the Action Cards for Elemental Tuning in case you need a specific elemental die for the active card.

The support action cards & summons are limited to 4 so remember not to overstack.

Share your Deck Recipes with other players in the comments below!

How To Unlock Co-Op/Multiplayer Mode In TCG?

How To Build A Deck For Genius Invokation?

You can edit your deck by selecting the Casket Of Tones in the Gadget section of your bag. You can have different decks that increase depending on your Player Level.

How To Get Casket Of Tomes?

Elemental Reaction Deck in PVe only have 29 action card! but thanks for the guide