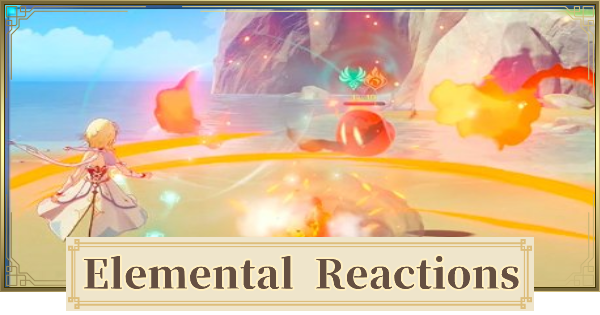 Check Out All Available Characters in Genshin Here

How To Cause An Elemental Combo (Reaction)

An Elemental Reaction occurs when an enemy is afflicted with two or more elemental statuses simultaneously. Depending on the reaction, enemies will take additional damage, have their defense lowered, and more.

Swap Characters And Use Elemental Skills

The easiest way to trigger a reaction is to swap between your own characters and use their elemental skills. For example, if you inflict the Cryo status on an enemy with Kaeya and swap out to Xiangling and use a Pyro attack, you'll cause the Melt effect, increasing your damage dealt!

You Can Use Natural Elements Too

▲Using the elements as you find them in nature can expand your battle horizons!

It's possible to use elements that exist naturally in the overworld to create a reaction too! For example, enemies that are on the water will have the water status on them, so if you use an Electro skill, you can electrocute them!

Spread occurs when you add the Anemo (wind) element to Pyro, Hydro, Electro, or Cryo. It deals huge damage and is extremely useful in the early game, as there are many enemies weak to fire moves! The combination of Pyro + Anemo is extremely potent and highly recommended.

Combining Electro and Cryo is another potent combination, as it will not only deal large Cryo damage, but also lower the enemy's physical defenses. If you have a character with powerful physical attacks, use this alongside them!

Crystallize For A Powerful Defensive Buff

If you add the Geo element to Pyro, Hydro, Electro, or Cryo, you'll imbue yourself with a shield that will block a certain amount of damage. If the enemy is afflicted with several elemental statuses, you'll get a shield for each one that's on the target, making this quite powerful.

This is particularly useful against large bosses that can't be knocked down easily, as it allows you some respite from their heavy attacks.

Combining Pyro and hydro will cause the Vaporize effect. The effect itself doesn't deal damage, but it will increase the damage that you do instead!

By using Pyro and Electro together you can overload a target, causing a powerful AoE explosion. This explosion can also break down tough materials and objects. This is really useful against enemies which are using heavy armor to defend themselves!

Combining Pyro and Cryo will cause the Melt effect. Just like vaporize, this doesn't deal damage in and of itself, but it does buff your subsequent damage done!

Using Hydro and Electro elements together will cause the Electro-Charged status. This will deal continuous damage to the enemy. Additionally, if there are enemies nearby which have the Wet debuff, electricity will discharge out to them and they'll take damage too.

Stacking the Hydro and Cryo elements together will freeze enemies in place, rendering them unable to do anything. You will be able to attack them freely, making this useful for fighting on water. You can also use Cryo magic to create a path to walk over bodies of water!

Combining Cryo and Electro causes the Superconduct effect, dealing Cryo damage in an area. It will also greatly lower the physical defenses of opponents.

Dendro (Nature) and Pyro combine together to produce the Burning effect, dealing periodic damage to the target. Also, if the opponent is using a wooden shield, it will also burn it up and leave the enemy without defenses.

Spread can be triggered by using Anemo on either Pyro, Hydro, Electro, or Cryo status effects. Doing so will cause great damage to the enemy. Since this reacts with so many elements, it's extremely useful and easy to combine.

Using Geo magic on an enemy with either the Pyro, Hydro, Electro, or Cryo status on it will grant you a shield, absorbing a certain amount of damage. You are effectively immune during this time, so you can go wild and beat on enemies.