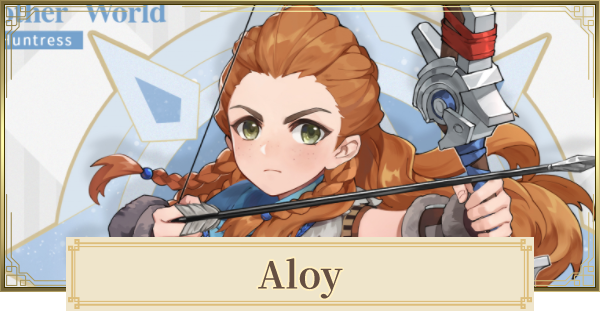 Aloy has powerful Cryo shots and an AOE Skill and Burst which makes her a great character for Melt and Freeze comps.

Perform up to 4 consecutive shots with a bow.

Aloy throws a Power Cell filled with Cryo in the targeted direction, then detonates it with an arrow, dealing with AoE Cryo DMG.

When Aloy is in the party, animals who produce Fowl, Raw Meat, or Chilled Meat will not be startled when party members approach them.

Aloy Has No Constellation

Aloy is the only character, so far, that has no constellations in her kit.

How To Use Aloy ?

How To Use Aloy's Elemental Skill

▲ Coil Stacks countdowns from 1 to 4 making her normal attack infuse with Cryo element.

Use Of Aloy's Elemental Burst

Aloy's Elemental Burst gives a powerful blast that gives huge damage to the enemies which is a good finishing touch for one-shot comps.

Her character is more of a Cryo damage dealer, focusing mostly on her Normal, Elemental Skill and Burst AoE attacks which what makes her a good DPS for beginners in the game.

Aloy Can Buff Her Team

In one of Aloy's passive which is the Combat Override. Whenever she receives the Coil effect from her Elemental Skill, she can buff her team's ATK, by increasing it to 8%. A great buff that is simple to activate.

One of her utility passive is that equipping her to your team can easily farm animals such as boar, and birds (fowl), as the animals will not be easily get startled upon approaching them.

Her Constellations Are Not Available

Genshin Characters are also depending on the characters' constellation when it comes to additional performance, but Aloy's constellations are still unavailable. You can only build her by leveling up her talents, equipping good artifacts and ascending her.

Aloy relies on small bombs or "coils" that is released from her Elemental skill for boosting her Normal Attack's power. However, in the overworld, it is difficult to make all coils hit all of the opponents.

Aloy Reviews From Other Users

Comment or send your opinions about Aloy in the comments or feedback for a chance to be featured in the article!

What Is Aloy's Tier For You

Aloy is the first collab character that was released in Genshin Impact. She is originally from the Play Station game Horizon.

No Voicelines From Other Characters

Aloy currently has no voicelines talking about her.

Aloy Has Not Appeared On Any Quest

Aloy has not appeared in any quest as of the current.

How Tall Is Aloy?

There is no in-game and official data regarding the height of Aloy. We compared characters and Aloy is Medium comparatively.

How To Get Aloy?

How To Get Aloy?

Aloy is a FREE character that can be obtain upon updating the game to the latest versions. The table below is a guide on what update will Aloy be available to claim.

Aloy is a free character alongside with her FREE Bow weapon named the Predator. Both the character and the weapon will be free to obtain upon updating the game to the latest versions (2.1 up to 2.2).

Does anyone know what she gives on her b-day?

good rotation for ppl just starting.
use elemental skill
switch to anemo traveler use skill to gather bombs and mobs
switch to electro character, zap the sht out of them.
switch to pyro and overload.
lazy hunting

Aloy's English VA is Ashly Burch from what I have sampled from her voice in Genshin and in horizon zero dawn.

best team for aloy venti? lol no
venti cant pick up bombs, sucrose and kazuha can on the other hand
best team for her would be her, klee and sucrose for melt bombardment