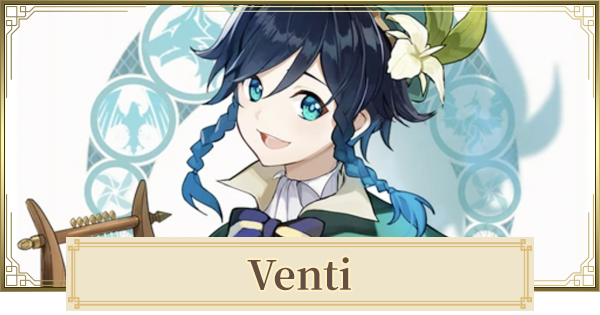 This build focuses on increasing the Swirl DMG of Venti, while also providing additional utility to his kit for further increase in DMG for the whole team. Build for Elemental Mastery or Energy Recharge for a high Burst uptime.

This build focuses on increasing the Venti's Anemo DMG. It's a pretty straightforward DPS build wherein you need to build for CR/CD for Anemo Crits.

This build does not require building CR or CD since your main goal is to increase the damage of Swirl. Elemental Mastery should be your main priority, but with the lack of a 5-star EM weapon, Energy Recharge main stat weapons will also work!

The point of this build is to increase the damage of Venti's Anemo. Since you do not need Swirl, you can solely focus on CR/CD and ATK for this build.

Since this build focuses solely on Swirl damage, you need to build as much Elemental Mastery as you can with your Main Stats and Sub-Stats. There is no need for CR/CD since Swirl doesn't Crit anyways.

This set will allow you deal as much damage as possible with Venti's Anemo DMG. You can build a bit of EM through his sub-stats, but this is not a priority.

Other Characters That Works With Venti

Notes About Team Comps For Venti

Venti is pretty easy to slot in to team comps since he can work well with most characters. Do note that his Burst does raise enemies in the air and some characters are unable to reach that.

Venti Guide - How To Use Venti?

The tap skill is a quick way to deal damage and knock back a few enemies. Since it's on a short cooldown, you can use this to quickly gather energy for Venti.

Venti's Hold skill creates a Wind Current that you can use for exploration. During Battle, it can be used to bring a character up to deal Plunge Attacks, but it's not really recommended for that kind of use.

Gathers Light Enemies In One Location

Venti's most prominent ability is his Burst, being able to gather lightweight enemies in a single spot and dealing Anemo & Swirl damage during its duration. The vortex is pretty strong and can pull enemies a distance away from it.

Venti's Burst will pick up an Element applied from the enemies it gathers to create an Elemental Infusion. It will continuously apply this element to those around it and deal Swirl as well.

The biggest limitation to Venti's Burst is that he is unable to pick up heavy enemies or bosses. This makes the Burst a bit useless during such scenarios. Although, you can still apply Anemo, Swirl, and shred with it.

Should You Get Or Wish For Venti?

Pull If You Need A Strong Crowd Control & Support

Venti is still one of the best if not the best character for Crowd Control currently in the game. This along with the changes to EM makes him a viable Anemo shred character for most team comps.

If you're running Venti on a purely Anemo DPS Build, he will greatly benefit from his Constellation 4 which increases his Anemo DMG. Beyond this build, it's not really viable for his other builds.

bruh, feminine what? Venti were based on female character Wendi from Honkai Impact 3rd.
Zhongli based on Adam (APHO mc)
Ei based on Raiden Mei
Nahida based on Theresa
so those the rest Genshin Archon are based on Honkai character.

in the anemo support section venti is referred to as a she, when in fact he is a beautiful femboy

please have a rerun i miss you

When you go into anemo support you call venti a her

are you still able to get him and how?