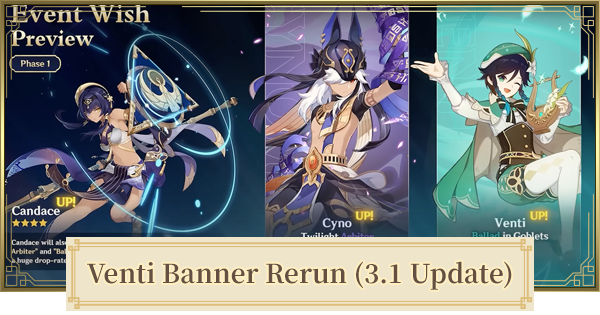 It was announced in the 3.1 Livestream that Venti will have his banner rerun in for the first phase of the 3.1 Update. The exact date of his banner including the featured 4-star characters will be released on September 28, 2022.

Will Have Double Banner With Cyno

Venti and Cyno will have a double banner in the first phase of the 3.1 game update. They will both share pity and pull counts and will feature the same set of featured 4-star characters.

Venti is the well-known mysterious tone-deaf bard who wanders around the human realm. Venti may look like any other carefree Bard, but he's actually the Anemo Archon, Barbatos. He prefers drinking nowadays, but his love for his nation remains the same.

Should You Pull In The Venti Banner?

Pull If You Need An Anemo Support

Venti excels very well as an Anemo support, and is also capable of fitting into most team comps. His kit is easy to use and can provide constant Anemo and Swirl damage without needing to stay in the field for too long.

One Of The Best At Crowd Control

When it comes to Crowd Control, Venti's still one of the best characters for it. His Elemental Burst can pull light enemies within its center, keeping them open for attacks from other characters while also dealing Anemo and Swirl damage.

Pull For Candace For A Normal Attack Buffer

Candace is able to grant all party members with Hydro during her Burst. She can also boost the Normal Damage attack of her teammates, making her highly valuable for teams like Childe or Ayato.

Venti's is one of the great Anemo support characters that can provide consistent Swirl damage, and his Elemental Burst is one of the best crowd control abilities in the game!

Candace As A Hydro Enabler

Candace has a unique ability with her Elemental Burst wherein she can imbue all party members with Hydro. During its duration, all normal attacks of the characters that wield either Polearms, Swords, or Claymores will be imbued with Hydro