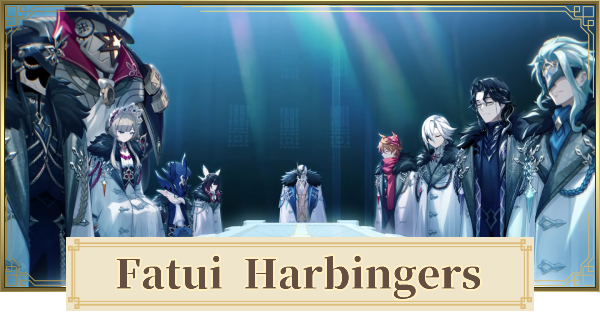 Fatui Harbingers - Overview & Are They Playable?

Pulcinella recruited Childe into the Harbingers. He might also play a part in Scheznaya's politics as he was called Mayor by Pantalone.

Scaramouche was a puppet of Ei's that had gone rouge. He eventually joined the Fatui Harbingers, but soon deserted after he got his hands on the Electo Archon's Gnosis.

La Signora was integral in getting the Anemo and Geo Archon's Gnosis. She found her end when she was executed by the Raiden Shogun in Inazuma.

Childe worked his way up the ranks to become one of the Fatui Harbingers. He worked with La Signora to gain the Geo Archon's Gnosis. Although part of the Fatui, he's pretty friendly with the Traveler.

Dottore is a man of science, known to have multiple research facilities across Teyvat. One of them was visited when Childe and his brother stumbled upon it in Liyue.

Yelan makes a reference to him during her Story Quest. Arlecchino calls him and Pulcinella heartless businessmen and dignitaries.

Arlecchino was the most vocal about the other's treatment of La Signora's demise, putting them at odds with the other more seemingly cunning characters.

Columbina can be seen serenading La Signora's coffin. Not much is known about her besides this.

She appears as a young girl with either an automaton or a guard with her. She barely said anything regarding La Signora's death.

Capitano isn't as cold about La Signora's death as the others, but he does note that it will not hinder their plans.

The Fatui Harbingers are the loyal subject of Tsaritsa and they move towards achieving her goals. They are the strongest of her followers and are likely the leaders of the whole Fatui operation.

Currently, there pose the greatest threat in the storyline of Genshin Impact as they seek to collect the Archon's Gnosis as part of their plans. However, what they'll do with the Gnosis are still unknown.

Although Childe, La Signora, and Scaramouche were introduced already in the game, the rest of the Fatui were unknown. That is until the release of the Teyvat Chapter Interlude Teaser: A Winter Night's Lazzo wherein they were all shown at once!