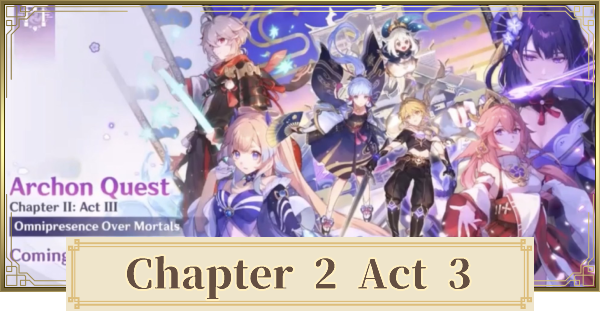 Omnipresence Over Mortals is an Archon Quest for Genshin Impact (Chapter 2: Act 3). Guide includes, 2.0 update, location, how to unlock & where to start, rewards.

Omnipresence Over Mortals - How To Unlock & Rewards

To Be Released In 2.1 Update

Omnipresence Over Mortals was revealed during the 2.1 Livestream and will be added to Genshin Impact as part of the 2.1 Update. As soon as the update is live, players should be able to start this quest once they meet the requirements.

Omnipresence Over Mortals - How To Unlock & Requirements

Similar to other Archon Quests, Omnipresence Over Mortals requires a minimum of AR level to gain access to. Consider completing World Quests and Daily Commission Quests to quickly increase your Adventure Rank.

Genshin Impact follows a linear story line so in order to access this quest, you must complete the previous quest, "Stillness, The Sublimation Of Shadow" first.

The resistance camp is located quite a ways to the west of your current location, in unmarked territory. Keep heading due west until you reach a waterfall you can jump off. You can continue gliding your way further west after this.

As you maintain your course west, you'll eventually come across a massive cliff. You'll have to climb up this to reach your destination!

7. Travel To The East Of The Island

The fastest way to get this next area is probably to teleport to Sangonomiya shrine and take the bridge to the south, due east.

Since you'll be traversing a wide part of this area, it can be a really good idea to unlock all teleport locations on the way! You'll be glad you did this later, so make sure to do this!

Part 2: Those Who Yearn For The Gods' Gaze

A simple elemental puzzle stands in your way here: use an Electro character to light all 3 elemental torches. However you need to do this in just a few seconds. (Fischl is always a safe and easy bet!) The Lawachurl shouldn't be a problem, trigger a reaction with the Hydro, Pyro, or Cryo elements to make short work of it.

In order to complete the Delusion Factory, you'll have to pick up the 3 amulets located in various parts of the domain. You'll find them on pedastals like the one above, so always keep an eye out for them!

3. Ride The Elevators Up

At a certain point in this Domain, you may come across what seems to be a dead end. Note however, that the platforms in this narrow room are moving vertically - simply jump on them in sequence and ride them to the top!

This device will shoot a variety of attacks out at you - being hit by 10 will cause you to fail the challenge. A good tip is to save your sprint dash for the exact moment it fires out its line ability. Doing it too early will result in getting hit.

Survive The Final Attack By Breaking The Summoned Gem

During the final attack, a single gem will appear on the field. Quickly search for that gem and break it. Breaking it would remove the area around it from the AOE of the final attack.

During this challenge you will be faced with multiple opponents at once. The ground will also randomly explode dealing AOE Electro damage to make sure to watch out for those purple light.

5. Avoid The Watch Of Guards

Once you are spotted by the guards, you will be sent back from the beginning. Avoid them by flying towards the upstream to the back of Komore Teahouse.

Signora hits hard and some of the attacks are difficult to dodge. Using shields will help you survive easier.

4. Do Not Use The Same Element Against Signora

During Signora boss battle, she will have two forms. One Cryo and One Pyro. During those forms she builds strong resistance on the element so avoid using those elements for bigger damage.

4. Use The Mechanic On The Side Of The Field To Maintain Temperature

how do you finish this quest without fischl????? im at the investigate part