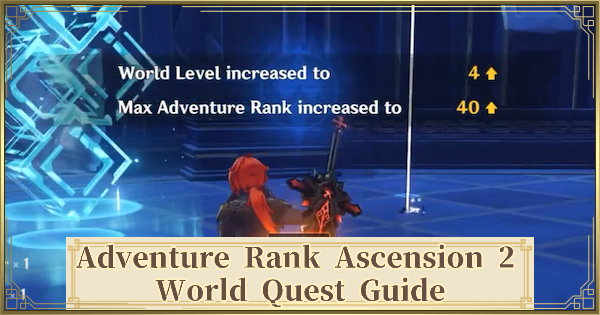 Adventure Rank Ascension 2 is a world quest in Genshin Impact. This guide includes quest location, how to unlock, quest rewards, how to raise your world level to 4!!

How To Beat The Trial "Ascend: Clear The Ruins"

To easily beat this trial, definitively bring Pyro, Cryo, Anemo, and Hydro characters in your party. See the table below for the recommended party comp. Bring at least one archer to deal with Ruin Guard easily. If you don't have Diluc, substitute it with Xiangling. If you don't have Chongyun, use Kaeya instead. You may also bring 2 Pyro characters for Elemental Resonance buff.

Use Pyro Attacks To Burn Down The Shield

There will be multiple Wooden Shield Mitachurls appearing in this trial. Bring Pyro attacker to burn down its shield.

At the middle of this trial, you need to defeat 9 enemies within 8 minutes. There will be an agent and multiple ranged hilichurls. Use Elemental Combos such as Vaporize (Pyro + Hydro) and Melt (Pyro + Cryo) to increase the damage dealt.

You'll be facing Electro Hypostasis at the end of this trial. you need to defeat them within 8 minutes. The boss scatters 3 electrical cores when its HP is low so make sure you use Elemental Skills to them to destroy them.

Your World Level increases to 4 after completing this quest. The enemies become tougher but drops higher rarity items. You'll also be able to play co-op with higher adventure rank players.

*played/picked bruh why is it turning it to stars??

i p***ed it with anemo traveler, kaeya, barbara and razor, so u should try it

for everyone asking, sucrose is a good substitute support for venti. anemo traveller is the next best thing. but if you have kazuha i def rec him as a dps and for triggering swirl

Not everyone got Venti during the event... Whats the next best thing for Venti?

Can a team with the Anemo MC, Xingling, Childe and Qiqi work?