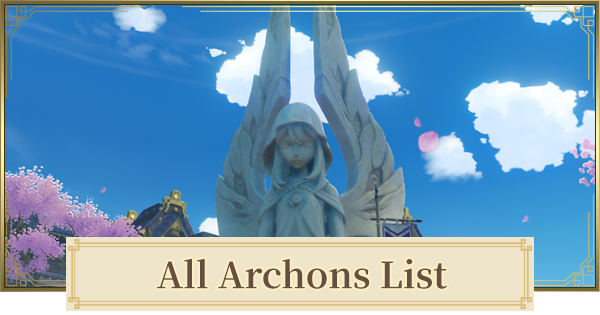 Check out this full list of Archons in Genshin Impact! Know more about the Archons profiles, visions, location, all we know about them!!!

What Is An Archon?

Genshin Impact Archons are the Gods that preside on each region of Teyvat, which has a total of seven (7) nations to be exact. These deities are the rulers that governs their nation. Every archon has its own gnosis that corresponds to the element of its nation of origin.

The table below are the names of the archons and the regions they reside.

A nation known as the nation of freedom. This region is a western inspired nation that is ruled by the anemo archon, Lord Barbatos.

The anemo archon's original form is a wind elemental / spirit that roams around in the mortal world. He took the human form of his late friend who died during the Decarabian Rebellion and used Venti as his mortal name.

A Chinese inspired nation located on the east side of Teyvat that is abundant with mountains, forest and rivers.

The Geo archon is the oldest of all the seven archons. He is worshiped as the Geo archon, Rex Lapis of the Liyue region. He has then decided to retire governing Liyue for so long and wandered in the mortal realm as Zhongli, a Wangsheng Funeral's consultant.

* Baal is the late (first) Electro archon and Raiden Shogun's twin sister that passed away during the Archon War.

Inazuma is a Japanese themed nation located at the south part of Teyvat. Its is consist of five (5) islands and surrounded majority by water areas.

Baal and Beelzebul are the twin Electro archons of Inazuma. Baal perished during the archon war, and Beelzebul or commonly known as Raiden Shogun continues to rule over the Inazuma. She then sealed the whole region in grief over her sister's death.

* Kusanali is not yet confirmed if she is really the Dendro Archon.

A nation that is said to be the home of famous scholars and researchers from Teyvat which gained the label, City of Scholars.

More information about the Dendro Archon's story soon! Check back again to get more updates!

The nation where the Hydro Archon resides. Details and such information about Fontaine are still not yet revealed. This section will be updated once the nation is revealed.

More information about the Hydro Archon's story soon! Check back again to get more updates!

The nation where the Pyro Archon resides. Details and such information about Natlan are still not yet revealed. This section will be updated once the nation is revealed.

More information about the Pyro Archon's story soon! Check back again to get more updates!

The nation where the Cryo Archon resides. Details and such information about Snezhnaya are still not yet revealed. This section will be updated once the nation is revealed.

More information about the Cryo Archon's story soon! Check back again to get more updates!

so 3 Girls (Waifu Collectables) Archons and 4 Male Archons....sad not 4 girls and 3 Males XD