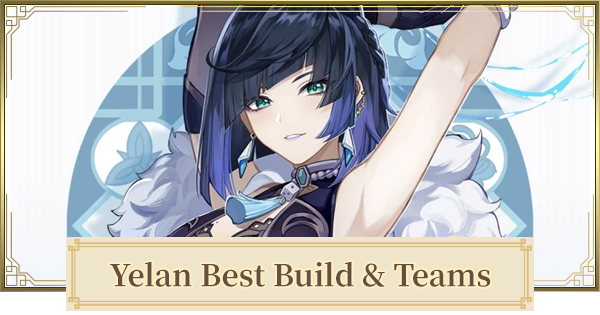 Should You Pull For Yelan ?

Pull If You Need A Top Class Support & Sub-DPS

Yelan is a Top Class Sub-DPS that is able to constantly inflict Hydro to enemies while being off-field. She is a great support to characters that goes well with Hydro Reactions such as Hu Tao and Ayaka.

Constellation 4 increases the Max HP of Yelan and the Party when an opponent is hit by her Elemental Skill. This enables Yelan to deal more potent damage and also provide additional power to HP scaling DPS. Since Yelan is also HP Scaling, her personal damage will also greatly increase.

Yelan has an elemental burst that works similarly to that of Xingqiu. This build maximizes the damage output of her elemental burst which allows her to deal damage even if she is not the active character.

This build increases Yelan's overall damage, not only elemental burst damage but also charge attack & elemental skill, which allows her to stand as a main DPS.

How To Use Yelan ?

The Elemental Skill produces 4~5 energy per use making it a great source of Hydro Energy.

Powerful Explosion Great For Breaking Through Waves Of Enemies

During Yelan's Elemental Skill, she is able to pass through enemies. This skill is great when you are trying to reposition for combos.

Yelan's Elemental Skill is also viable for traveling for it is quicker than normal sprinting. When using Yelan at the overworld, this can be an effective method. However, the length of the skill depends on the number of enemies you will pass through.

Yelan's Elemental Burst deals multiple Hydro damage to enemies that goes with the Charge Attack and Normal Attack of the character that you are using. This enables you to deal more damage per second.

Not only that you will be provided by a powerful Hydro damage, Yelan is also able to buff the damage dealt by your attacking DPS.

Special Charge Attack Is Useful As First Hit (During Exploration)

▲You can check if the special charge attack is active by looking at the ring.

While not in combat for 5 seconds or after using her Elemental Skill on opponents (RNG Based), the ring on Yelan's wrist will glow. This signifies that the special Charge attack that deals AoE damage that scales HP of Yelan and has 80% faster charge time can be released. This is a minor skill in Yelan's kit at low constellation but is notably useful when hunting overworld.

Passive Encourages The Use Of Multiple Elements

The Talent, "Turn Control" increases the Max HP of Yelan depending on the number of elements in the team. This encourages players to use 4 different elements when using Yelan.

Replace Flat HP by ER and you're gucci.

No one is "advertising" flat stats as the way to go dude, but not everyone can roll perfect stats, which is why those are listed, as substitutes until one can get a better piece to replace it.

Seriously, so some research and maths, and stop advertising flat stats as the way to go.
ANY flat stat is beyond trash and usuless, I rather have DEF% than ur trash flat HP.
Seriously, two google research on the maths formula of artifacts stats and you understand how bad they are...

Ouh a fangirl (or boy) is ****ed because her/his favorite character isn't scored as SS.
Go cry more in the corner.

Tier lists like this is nothing. Ultimately you go with whichever char you enjoy the most. Period.

I’m wondering about the comparison to Ayato as well. I have him, so not sure if I should pull for Yelan or wait for Kazhua.