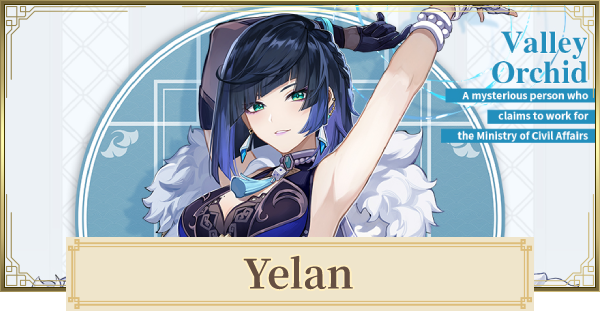 Known As A Special Intelligence Officer

Yelan is a special intelligence officer who reports directly to the Tianquan Ningguang. Although, the title itself is not entirely accurate, thus it only covers the scope of her work.

Her Identity Is A Mystery

Yelan's identity has always been a mystery. She is described as a ghost who walks in the middle of many crises under various names. Her forte is to gather intel and stirring things up in the dark, which she then relies on to attain what she wants.

Note: This section may contain spoilers from the Archon Quest.

It was revealed during the Perilous Trail Archon Quest that one of the people stuck under The Chasm was his ancestor, the known Thaumaturge, Boyang.

Hunderd years ago a known person gifted Boyang and his brother Rongzhao with a device called Fantastic Compass. This device was brought along to The Chasm in order to use against the monster of Khaenri'ah.

Yelan has also appeared in various quests, such as story quests, world quests and events in the game. You may encounter Yelan on different locations depending on the quest.

A New Hydro Bow Character For 2.7

Yelan is a new 5-star playable character that was released during the 2.7 Update. Yelan possesses a Hydro vision, and wielding a Bow weapon.

Yelan's Character teaser that was officially released by Hoyoverse through their official Youtube account. See a glimpse of Yelan's personality in this trailer.

People voting her as an SS character just because she is a female character. Wtf. She is not SS tier.

Will Yoimiya and Yelan be a duo?

does she play using normal attack?
or charge attack (like ganyu)?

Amos will work as any other bow, it will be wasted on her cuz she is hp based. Stringless would be a mile better than amos.