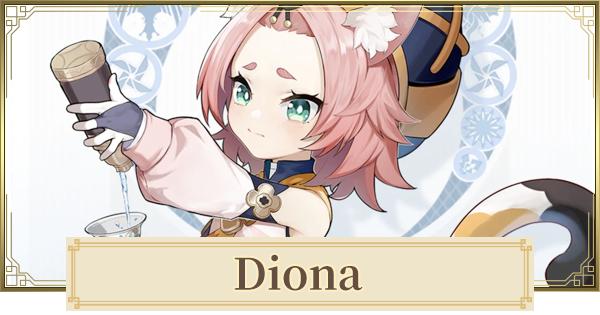 Diona is a valuable support that has the ability to not only heal but can also provide shields. This build not only increases the effectivity of her heals but also toughens up her shields.

Diona is a multi-role character, capable of being support, healer, and damage dealer at the same time. She can easily fit into any team comp.

Fires an Icy Paw that deals Cryo DMG to opponents and forms a shield on hit. The shield's DMG absorption scales based on Diona's Max HP, and its duration scales off the number of Icy Paws that hit thier target.

Dashes back quickly before firing five Icy Paws. The shield created by a Hold attack will gain a 75% DMG absorption Bonus.

The shield has a 250% Cryo DMG Absorption Bonus, and will cause your active character to become affected by Cryo at the point of formation for a short duration.

Tosses out a special cold brew that deals AoE Cryo DMG and creates a Drunken Mist in an AoE.

Characters shielded by Icy Paws have their Movement SPD increased by 10% and their Stamina Consumption decreased by 10%.

Opponents who enter the AoE of Signature Mix have 10% decreased ATK for 15s.

When a Perfect Cooking is achieved on a dish with restorative effects, there is a 12% chance to obtain double the product.

With Constellation 2, the DMG absorption of the shield will be increased depending on the number of paws that hits the enemies. This will also provide shielding and cleansing in co-op.

Constellation 6 will not only heal the team but also increase the Elemental Mastery of the team furthering the support capabilities of Diona.

How To Use Diona ?

Use To Get A Cryo Shield

You can use Diona's Elemental Skill as an opened during battle to get yourself a Cryo Shield. It's not as hefty as other shields, but it's on low cooldown so you can keep on generating it through a battle.

Apply Cryo To An Enemy

Besides the shield, Diona's Elemental Skill will also toss out Cryo projectiles that afflict enemies hit by it with Cryo. Since it's homing, it's an easy way to proc Cryo as a set up for Elemental Reactions.

It's best to save Diona's Elemental Burst for when your Main DPS needs healing. It's an on-field ability and will greatly benefit your active character with its constant healing.

Apply Cryo To Enemies Within Range

If you need a quick, multi-target Cryo application, Diona's Elemental Burst will work with that. All enemies within its field will be applied with Cryo so you can set it up for Elemental Reactions.

Diona's strength lies in her support abilities. She's one of the few characters that offers both a shield and healing to her team. She can fit easily in any team comp as well!

With her Elemental Skill & Burst, as well as being a Bow user, Diona is a consistent Cryo applicator. She may not be as strong damage-wise, but she's great for any Cryo Elemental Reaction set-ups.

DPS Is Not That Good

Diona's whole kit revolves around support, making it a bit difficult to build her as a DPS. Her output is decent, but it's not as strong for a main DPS.

Diona Reviews From Other Users

Comment or send your opinions about Diona in the comments or feedback for a chance to be featured in the article!

What Is DIona's Tier For You

A Bartender Who Despise Alcohol

Despite of Diona being a popular bartender in Cat's Tavern, she thinks that alcohol will only reveal people's bad side. Diona, therefore, aims to create disgusting alcoholic mixes so that everyone will start to hate alcoholic drinks.

Draff is Diona's birth father, and is one of the best hunters in Springvale, aside from his amazing hunting skills Draff seems to have a terrible drinking habit which correlates to how Diona treats alcohol as if it is the main villain in their lives.

How Tall Is Diona?

There is no in-game and official data regarding the height of Diona. We compared characters and Diona is Small comparatively.

How To Get Diona?

Get Diona Through Wish Banners

Diona doesn't have her own character wish banner, however you can still obtain Diona through these permanent banners: Wanderlust Invocation! and Beginner's Wish.

Obtain Diona Through Other Character Banners!

You can also get a chance to pull Diona through other characters' banners. Drop rates for Diona will be boosted depending on the banner.

The rate of Diona is boosted at the following wish banners.

Characters With Same Element and Weapon As Diona

"Affiliation: Liyue" ok I'm out, she's bartender in Mondstadt, has a cryo vision from Mondstatd, her dad is from "Deauclaire" (Dunno how it's translated in English, maybe something like Clearwater IDK) but she's from Liyue ? Wat

Why put def flat on artifacts ? Even her shield is scaled on HP ? Just curious

Are the DPS artifact stats on the sands a mistake?

You're artifacts effect are wrong! Can you edit it up ? You're giving a misleading build set ups to those people who came here. Kindly edit it because it is pretty frustrating

Artifact effect indicated is for pale flame. Hope you can correct this