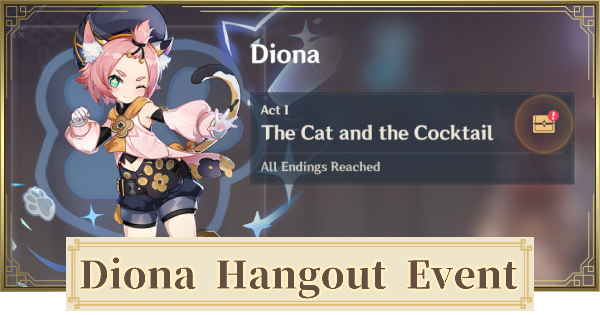 Diona's Hangout Event is expected to be added to the game on April 28, 2021 with the implementation of the 1.5 Update. It should be available as soon as the update is live.

You can use 2 Story Keys to unlock the event and keep a maximum amount of 3 keys.

Completing the Daily Commissions will give you a Story Key that you will need to unlock the Hangout Event. These keys are the same keys to unlock a Story Quests.

Hangout Quests will have several endings depending on the choices you made while you are hanging out with the character.

Hangout Will Fail If You Don't Appease Cats

Make sure to remember which cat likes which item because if you give the wrong one to both of them, the hangout event will fail. Give Cat Toy to Roger and Cat Food to Nelson to progress.

By completing the objectives for this ending, you will unlock the Kitten Queen achievement. Collect the achievement for an additional 5 primogem reward!

Choosing to sneak through the camp puts an added difficulty to the quest as you'll need to check for enemy movements and their patterns. It's much easier to just plow through the camp and defeat the hilichurls.

Unlocks But There's A Catch Achievement

Clearing this ending will unlock the "But There's A Catch..." achievement! There seems to be no special condition for this besides helping Diona make a special base drink.

Cannot Observe Pots When In Combat

It's best to clear the camp of Hilichurls first as being in combat will prevent you from checking the pots. Once they're cleared, you can then go to each of the 3 pot's locations.

As long as you select the two major choices above, getting The Ultimate Special choice will be straightforward. No matter what you mix later on in the quest, it will result in the same ending.

Poll - Which Ending Is Your Favorite For Diona?

Every Hangout Memory you unlock will give you rewards for your effort! This will always include a Photocard, commemorating the branch ending's result. You can also get Primogems and other materials for completing branches.

Completing an ending & going through all possible pathes in the Hangout event can also unlock some achievements under the Wonders of the World Achievements List.

You don't need to "sneak" or even make the choice. You literally run straight from Allen or whatever to the checkpoint (climb the cliffs).

for diona's special, just run among the monsters xD not need defeating or sneak past them