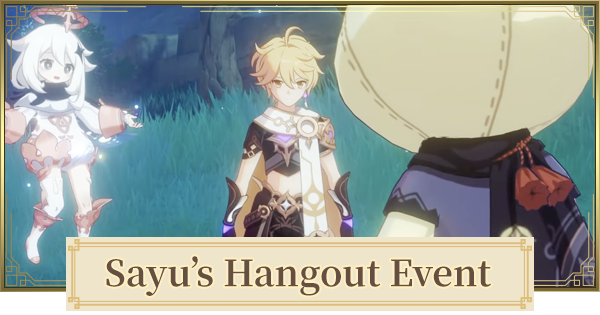 Ending 3 - Everything In Moderation

Ending 5 - With the trees

On every Hangout Memory you unlock will give you rewards relating to the character you had an event with. If Sayu's Hangout event follows the same format as those released before, it should give rewards per ending unlocked!

A New Hangout Event For 2.2

Sayu's hangout event is announced to be released on October 13, 2021 and it will also be permanently available after the 2.2 Update.

If you have Zhongli, it is possible to do the challenge even less than 30 secs. If you have not, use other shield(noelle should be fine)

I wish there was a poll for which ending people liked

I seriously love this Hangout, Traveller is just being Dad

The person who did not get the achievement, i did it with 55 sec remaining and still got it, either mine glitched or yours did