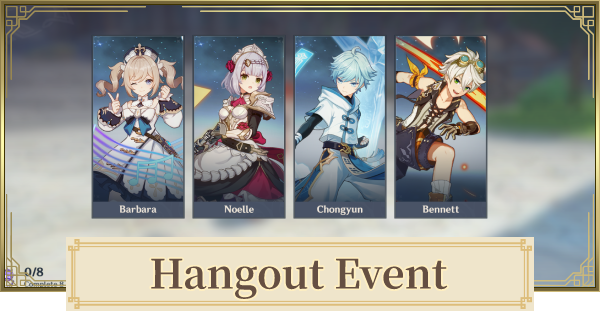 Kuki Shinobu Will Have Her Own Hangout Event

Kuki Shinobu will have her own hangout event in the 2.7 Update. This will coincide with her banner and character release date!

There are rumors going around that Mona could have her own Hangout Event and it could be released during the future updates. Since this is based on rumors, this is not guaranteed.

Hangout Event is a permanent feature in Genshin Impact and was released as part of the 1.4 Update. It features unique stories focusing on different 4-Star Characters. The quests have multiple endings and provide rewards with each completion.

Added Permanently To The Game

Although the hangout quests will be added in time with the Windblume Festival, they will stay in the game even if the festival is over. Players can play the quests in their leisure!

Hangout Quest Event is a special quest event that focus on Main character's interactions with a quest character. Unlike the linear quests, players choice will affect the course of the quests' ending. There will be multiple endings for each Hangout Quest.

You will need to spend Story keys to unlock each of the Hangout Quests. 1 Story Key can be redeemed by completing 8 Daily Quests. Unlocking Hangout Quest seems to take up 2 story keys.

Players will only gain access to the Hangout Quests once they've reached the Prologue: Act III - Song of the Dragon and Freedom Archon Quest. Players who are beyond the point by the time the events are added will unlock them immediately.

Check Out The Archon Quest Walkthroughs

It has been stated that players can earn better rewards for collecting more endings of each Hangout quests. This means that the quest can be played over and over.

Players can collect cards of key moments in the quest, detailing vital moments of your interaction with the character. More cards can be obtained by collecting different endings.

the starred part says "a,s,s,u,m,e" dont know why it did that

You know male and male or female and female or any other romance is a part of the life we live in and its totally normal, no need to ***ume that there cant be romance between same genders its a little tone deaf, thanks for the information provided about the event