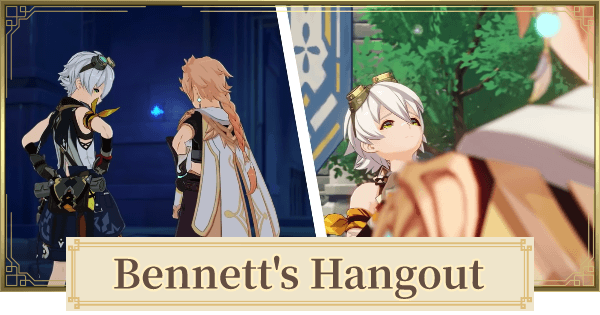 Bennett's Hangout Event is a date event for Genshin Impact. Learn all about, all story endings, branches, how to unlock, release date & the Mechanism Torche Puzzle Solution.

Being In Combat Prevent Quest From Progressing

There are Hilichurls around the area where you meet Bennett. If you go into combat with them, the quest will pause and you won't be able to progress the Hangout until you deal with it.

Same as in Ending 3, you will do a bit of cooking for this quest. It'll use the same ingredients: 1 mint, 1 radish, and 1 slime condensate.

Ending 5: No Wonder It's A Top-Class Commission

The puzzle will require you to activate mechanisms in a set sequence. The clue doesn't outright say the solution so check out the image above to know it's correct sequence!

Clear Without Making Mistakes To Get Achievement

Follow the guide above without making any mistakes in the mechanism torch puzzle and you will unlock the "Power Of Luck" Achievement. The unique achievement will give you primogems for completing it!

Poll - Which Ending Is Your Favorite For Bennett?

Completing an ending & going through all possible pathes in the Hangout event can also give you an access to obtain Primogems and unlock some achievements under the Wonders of the World Achievements List.

Bennett's Hangout Event was released on March 17 with version 1.4 of Genshin Impact.

Hangout Quests will have several endings depending on the choices you made while you are hanging out with the character. These is based on your choices during the Hangout, affection does not play a part here.

The last 2 can be done with adventure choice, but instead, choose 'take off right away' instead of 'making food'