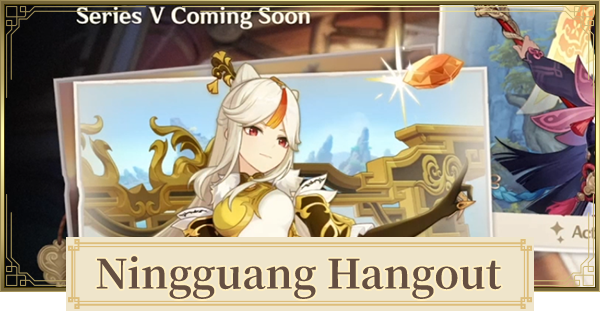 Ending 1 - The Weight Of A Collection

Ending 2 - While The View Remains Good

Poll - Which Ending Is Your Favorite For Ningguang?

Each Hangout Memory you unlock will give you rewards relating to the character you had an event with. If Ningguang's Hangout event follows the same format as those released before, it should give rewards per ending unlocked!

Hangout Event For Ningguang - Who Is Ningguang?

Ningguang is known as The Tianquan of the Liyue Qixing and the owner of the famous Jade Chamber. She is the one who governs Liyue in present time. A very intelligent woman especially when it comes to business.

A New Hangout Event For 2.4

Ningguang's Hangout Event is expected to be released on January 5, 2022 and will be permanently available after the 2.4 Update.

Complete The Crane Returns On The Wind

You must first complete the quest The Crane Returns On The Wind in order to unlock Ningguang's hangout event.

The Crane Returns On The Wind Guide

I think the fish achievement may have some secret requirement. I tried doing it 3 times, I only got it on the 3rd try because i kept catching fish until the achievement popped up. I think i caught around 8 fishes

if you kill the fish with a skill, it still counts as if you caught it. just use zhongli e if u have him and bam done

about the fish, i didn't even collect them. i killed some when the fire barrel exploded and got the achievement

You just grab the fish.. its not difficult