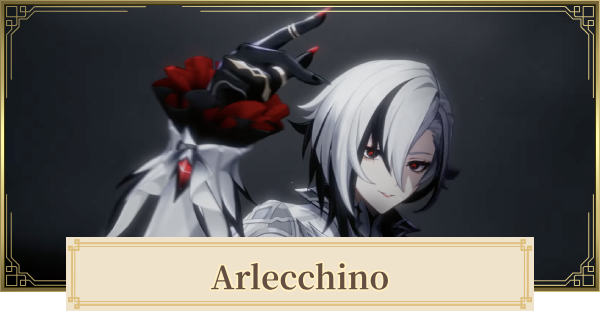 Arlecchino appeared at the official Genshin Impact Teyvat Chapter: A Winter Night's Lazzo teaser video, however, Alrecchino's release date was not disclosed during the trailer.

Who Is Arlecchino (The Knave)?

Arlecchino (The Knave) was shown during the A Winter Night's Lazzo trailer. Together with the other Fatui Harbingers, Arlecchino was seen standing with them mourning to one of their comrade's remains.

Arlecchino is known to be "Harlequin", the trickster among the others and one of the Fatui Harbingers in the game.

Arlecchino was mentioned by an NPC in the The Very Special Fortune Slip quest series. There you will meet Lyudochka Schneitzevna who states that they grew up in an orphanage set up by Arlecchino.

Rumors from the Genshin community say that the Fatui manipulates the children in that orphanage and forces them to become loyal to the Fatui.

Arlecchino voice actor was reveled to be Mori Nanako. Check out her notable roles on the table below!

This section will be updated once Arlecchino is officially released in the game. Check back again to get more updates!

There are rumors saying that Arlechinno might be involved in Version 2.4, although so far, he has only been mentioned by NPCs. No information regarding her appearance is known as of now.

It's too fast to assume that she will be playable.