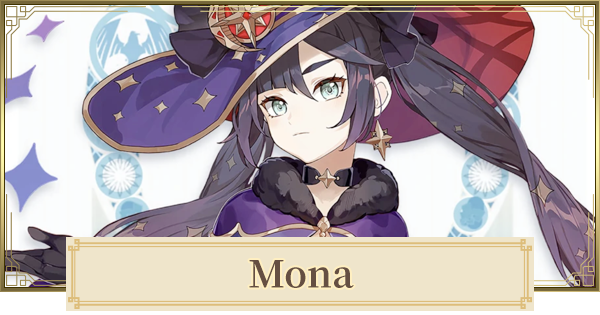 This build focuses on increasing the damage for Mona's Burst, while also ensuring that she has a good uptime for her Burst. The damage will depend on Mona's CR/CD and Energy Recharge instead of through her ATK%.

Either Go For ER or CR/CD

The goal is to have Mona's Burst available as much as possible so having an Energy Recharge is good for Mona. She also converts ER to Hydro DMG. If you have any CR/CD weapons available, that would also work seeing as Mona's Burst does Crit!

For a Burst DPS Build, you need to have at least 180% Energy Recharge in order to have a good Burst uptime. With the Emblem of Severed Fate set, you can even get an increase in your Burst DMG depending on the Energy Recharge.

Build CR/CD As Much As You Can

Mona's Burst crits so having a good CR/CD ratio is great for increasing her DPS. You can build around 50/100 CR/CD to ensure a good chunk of damage whenever she uses her Burst.

As a main DPS, you will need a good chunk of CR/CD and ATK% in order for Mona to deal good damage across all of her attacks. Energy Recharge and Elemental Mastery can also be built, but these can be an afterthought for the sub-stats.

Other Characters That Works With Mona

Notes About Team Comps For Mona

Mona is a versatile character. She's strong enough that she can be a main DPS and she's equipped with support abilities, allowing her to slot into a Support role. Mona can work in most Hydro-focused team comps!

Mona Guide - How To Use Mona?

Mona's Elemental Skill is a taunt for enemies, meaning while it's active, they will turn their attention to it instead of you. It also periodically applies Hydro to enemies around it.

Holding Mona's Elemental Skill displaces her to the back while leaving a phantom. It is a great move for doing a strategic setup & evasion.

Set Up For High Damage

Mona's Elemental Burst doesn't necessarily do high damage by itself, but it is a great set-up for high-damage combos. This is due to the effect that it applies which increases damage taken by enemies affected by it.

Besides the increased damage, Mona's Burst also restricts the movement of lightweight enemies. Note that heavy enemies will be unaffected by this, but they will still have the lingering effects of the Burst.

Should You Get Or Wish For Mona?

No Need To Target Mona When Pulling

Mona is a great support that can boost the damage output of the whole team. However, she can appear at any banner anytime. It is recommended to focus on limited characters over Mona.

At C1, the DMG of all Hydro-related reactions (excluding Dendro & Geo) is enhanced by 15%.

Constellation 2 Is Great For DPS Mona

With C2 Mona, the DMG capability of her normal attack will be boosted greatly enabling Mona to be a powerful Main DPS.

shes the best hydro dps in the game but people sleep on her because shes a catalyst... she solos.

worse than kokomi but ok

why i lose with her every time