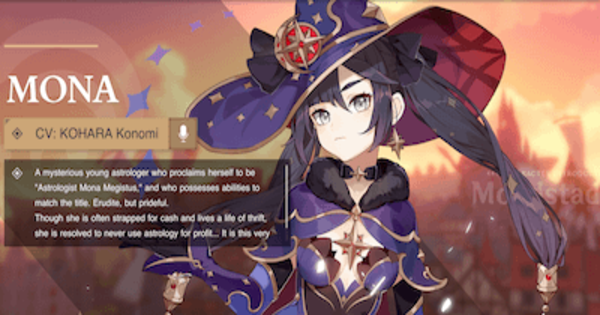 Never Had A Banner Release Before

Mona's banner has never been available before in the game, so the chance of her gaining the spotlight increases with time. This may not be true if gameplay meta makes her too OP due to some new mechanism however.

Already Included In Pools Of Many Banners

Though Mona hasn't featured in a banner yet, she was already included in many pools as candidates for rolls like for Ganyu, so it it possible to pull her as a by-product of newer banners.

Regional events play some role in determining which character banner gets releases, as well as team affinity with new characters. As Mona has a strong presence in Mondstadt, players looking out for Mona can take note when Mondstadt events pop up.

Expected To Be Released Mid-Half Of Year 2021 At Least

Mona banner is expected to be released no earlier than the mid-part of 2021. This prediction is following the update pattern of Genshin and the fact that there are newer character banner like Xiao being released that will take the spotlight for some time.

Warning: This section of the article contains prediction regarding the upcoming Banner based on available info & news.

For this banner, Mona will be available for a pull with better rate of appearance. Player wanting a new support or burst DPS, or those simply wanting to increase her Constellation can finally get their chance.

Should You Roll Mona Banner If It Comes Out?

This section is a work on progress. We shall update you as soon as the banner releases.

Depends On If You Need A Hydro Support/ Burst DPS

Whether or not you need Mona depends on if you're in need of a Hydro Elemental Enabler/ Support or burst DPS sub-carry, both roles that Mona is good for. Mona has a lot of utility and can handle multiple roles in many teams, but require some investments before she can start filling the roles you want her to perform.

With Ganyu's Cryo ability, Mona can provide her with the much needed-Hydro element support to chain freeze opponents. They can form the backbone of a freeze Comp that can lock down enemy movement effectively.